As explained in the most recent post in this category, this will now be a monthly feature, falling on the first Friday of each month. In it, I will take a look at seven examples of Dictionary.com’s “Word of the Day” from the previous month, as well as seven from the Urban Dictionary. Included will be parts of speech, definitions, and origins, as always. Then I will spend a few rambling paragraphs giving my thoughts on the words: what I like or don’t, and how I think the words should be used. Each post will conclude with a sentence incorporating at least a few of these words into something approximating rational thought. With any luck, a good deal of fun will be had with this, particularly considering the contrast between my two sources.

About that, though. There need to be some disclaimers and warnings when it comes to Urban Dictionary. First of all, in my limited experience with the site, I realize that it shares with Wikipedia the permission for anyone with an internet connection to participate in its contents. Naturally, then, what one finds on the site is rarely definitive. Its users lean towards humorous definitions. So the contrast with any established dictionary couldn’t be starker. The Urban Dictionary is a place to find information about new words and phrases, most of which are likely to have a short life span. And whereas some of the Dictionary.com words may be more appropriate to writing than speech, the opposite will almost always be true of Urban Dictionary.

So, if Dictionary.com gives us the language of the ivory tower, and Urban Dictionary that of the streets, it should come as no surprise that often on the latter site one will come across foul language. After considering it, I’ve decided to include that language, in moderation, in these posts. I do not wish to offend anyone, and I will set up these posts in two parts, with a clear warning when a reader reaches the second part that there will be some profane or obscene words there. Everything previously included in my “Words” posts can be found in the first part, except the manufactured sentences. Why am I not avoiding foul language? I believe that the study of language can’t be limited to what’s comfortable or inoffensive. The whole idea of using Urban Dictionary was to bring into play words that are in common use. Whatever else needs to be said about coarse language (and I will try to say what needs to be said), it’s popular among a wide variety of people. Still, I will do my best not to wallow in trash. Selecting seven words/phrases from each site every month means that I can generally avoid too much time there. But I will also use the same seven days for each site, to ensure that not every word is a personal favorite. In conclusion, I encourage my readers to read through the whole post, as I will strive to have something of value throughout, but I will put up warnings to keep your options open.

9/12: Dilatory (adjective) tending to put off what ought to be done at once; given to procrastination. Origin: Dilatory is from Latin dilatorius, from dilator, “a dilatory person, a loiterer,” from dilatus, past participle of differre, “to delay, to put off,” from dis-, “apart, in different directions” + ferre, “to carry.” First Known Use: 15th century

9/13: Panache (noun) dash or flamboyance in manner or style. Origin: Panache is from the French, from the Medieval French pennache, from Italian pinnacchio, feather, from Late Latin pinnaculum, diminutive of penna, feather. It is related to pen, a writing instrument, originally a feather or quill used for writing. First Known Use: 1553

9/18: Pleonasm (noun) the use of more words than are necessary to express an idea; as, “I saw it with my own eyes.” Origin: Pleonasm is from Greek pleonasmos, from pleon, “greater, more.” First Known Use: 1610

9/22: Rapine (verb) the act of plundering; the seizing and carrying away of another’s property by force. Origin: Rapine derives from Latin rapina, from rapere, “to seize and carry off, to snatch or hurry away,” which also gives us rapid. First Known Use: 15th century

9/27: Gadabout (noun) someone who roams about in search of amusement or social activity. Origin: Gadabout is formed from the verb gad, “to rove or go about without purpose or restlessly” (from Middle English gadden, “to hurry”) + about. First Known Use: 1837 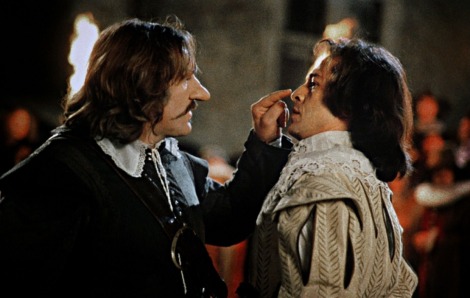 Chichi would be a great insult if it didn’t feel so obscure. It is a gently scoffing way to refer to people making an obvious and artificial attempt to look “trendy” or fashionable.

Forms of the word “procrastination” are very common, but dilatory sounds much better than “procrastinative” as an adjective, so it’s definitely a feasible substitute.

Panache originally referred to a plume of feathers atop a helmet, which is a fantastic visualization of what the word now means. It is probably the most recognizable word of these seven.

Pleonasm presents a nice irony in that it feels like a superfluous word. “Redundancy” is more familiar and means essentially the same thing. Based on the example from the definition, the difference between the two terms might be that a pleonasm expresses a word or phrase that had already been implied, whereas a redundancy is the use of two different words that mean the same thing. According to Wikipedia, the latter idea is a definition of “tautology,” yet another word to add to the mix. So “redundancy” is more of an umbrella term, and it carries a negative connotation that I don’t quite see in pleonasm. In any case, while the use of superfluous words is generally frowned upon, it can serve a rhetorical purpose. “I saw it with my own eyes” isn’t going anywhere.

The “Word of the Day” entry listed rapine as an intransitive verb, but everywhere else I’ve seen it only as a noun. In fact, the definition is for a noun, so let’s think of it that way. It’s a very strong word, due to its relation to the word “rape.” Befitting a fifteenth-century word, it is an idea associated with the Middle Ages.

Copacetic is an American word originating from early in the twentieth century, but its precise origin is unknown. It has a bit of a quirky sound to it.

Finally, gadabout is a colorfully informal term for a wanderer. In the age of the internet (with “amusement” and “social activity” always at one’s fingertips), it may become obsolete, but perhaps the wandering doesn’t have to be physical.

9/9: Regret ceiling (noun) the point at which one stops feeling remorseful regarding a thought, comment or action. Definition contributed in 2011

9/12: Epic fail (noun) complete and total failure when success should have been reasonably easy to attain. Definition contributed in 2008

9/13: Serial Infatuator (noun) a Serial Infatuator is someone who continually has intimate relationships that last only between 3-5 months. It is the defined timeline for infatuation. Definition contributed in 2011

9/18: Conference Call of Duty (noun) a work-related conference call in which you dial in from home while playing Call of Duty. Practitioners must take care to not un-mute their phone with gunshots blaring in the background. Definition contributed in 2010

9/22: Unlightening (noun) a process of learning something that makes you feel dumber. Definition contributed in 2011

9/27: Gaming sense (noun) the ability to sense things in games, simply because of predictable, long-standing game clichés. Definition contributed in 2011

Regret ceiling makes good use of the term “ceiling,” used in reference to the upper limit set on something. Among these seven, it is probably the most formal-sounding term. This ceiling needs to be sufficiently high for relationships to heal, but in most cases it does need to exist for life to move on.

Epic fail is the clear winner of this bunch, having attained the most circulation by far. It defines itself, but the most popular definition on Urban Dictionary includes the interesting addition that success should have come easily. Epic fail can be used to refer to difficult enterprises that blow up, but it’s much funnier in reference to failure that you’d never expect.

Serial Infatuator: the word infatuator seems to have been coined for this phrase. Infatuation is usually thought of as a reaction rather than an action, so the use of this word as an active pursuit feels weak. But a better noun doesn’t spring to mind — leastwise, not one conveying a similar idea; plenty of imprecations could be used. Again, though, the combination of words is interesting, with “serial” often used in connection to crimes.

Two of the entries refer to video games, so they hold very little interest to me. Still, Conference Call of Duty is a clever splicing of phrases and a funny reference to the cliché about video games and indolence. The best part of the gaming sense entry was the examples listed, including: “my gaming sense tells me that this innocuous red barrel will explode if thrown,” and, “my gaming sense tells me that I’ll have to fight a boss in this unexpectedly cavernous room.” But upon further reflection, it’s a terrifically uninteresting concept…to me, anyway.

Unlightening is somewhat obvious. But it’s a relatable idea. The major problem with it is how similar it sounds to the word from which it comes. So, in speech, it might not actually be useful.

And finally, we have layout bitching, the vulgarism of the month. As a user of Facebook, I like the idea here. I’ve experienced people complaining whenever something to do with the site is changed, and often the complaint is simply over the fact of change itself. It should be apparent by now that the internet is a place of constant change. There’s no room for nostalgia about anything. This has pro’s and con’s, but it needs to be acknowledged. The basic problem, beyond the argument that some of the changes may or may not be improvements, is that Facebook seems to be a place to broadcast a complaint immediately, even before the new look has been fully explored. And with all the complaining that goes on, the number of Facebook users continues to increase. So there may very well be reason to call people out on their complaining.

Notice the overuse of the word complain in the paragraph above. That it’s a weaker word than bitch should be obvious. But what about other substitutes? Fussing, griping, grousing, wailing, whining. All are suitable, but there’s a reason that obscenities are often euphemized as “strong language.” For the purposes of denigration and exclamation, nothing is as effective as an obscenity. The use of bitch as a verb for “complaining” is extremely derogatory and pointedly sexist. But it’s guaranteed to get the attention of the listener in a way that none of the other words possibly could.

Using the word bitch as a noun in reference to a woman dates all the way back to the fifteenth century, but it wasn’t until the twentieth century that it became a verb. As with all vulgarisms, I understand its value, particularly in the writing of natural dialogue. But some caution is warranted when it comes to real conversations. It is a nasty word to say to another human being, and especially so as part of a phrase like layout bitching, which is such a trivial thing. Perhaps the trajectory of language evolution will soften terms like these as they become overly familiar. Time softens many things. But even then, we’ll just come up with new ways of insulting each other. It’s not the word, but how you use it.

The chichi gadabout, a Serial Infatuator, went on the town in search of a date with his usual panache, but, upon his first pleonasm to his intended victim, he received cold water to the face — an unlightening experience for her, an epic fail for him.