Nothing but the best this time — two films that are as acclaimed throughout the world as anything we’re ever likely to see. I had never seen L’Atalante before last week, but when I did, the similarities, and differences, between it and Sunrise were immediately apparent. Made within seven years of each other, both were directed by legendary filmmakers who died young soon after completing them. (F.W. Murnau, who directed Sunrise, died four years later, but Jean Vigo died less than a month after L’Atalante‘s release.) Thematically, both films are about the challenges and rewards of marriage (focusing on fidelity and intimacy, with emphasis on the couple’s socioeconomic situation), and also about the contrasts between city and country life. Despite the obvious differences between a silent film made by a German and an early “talkie” made by a Frenchman, both films share the qualities of excellent cinematography and elegant storytelling, punctuated by unforgettable and strange images. The significant difference between the two, as I see it, is that Sunrise is a fairy tale, a bold attempt to use cinema to tell a universal and romantic story. L’Atalante, for the most part, is more down to earth, a strikingly sensual slice-of-life involving specific people rather than archetypes. Another difference is that one film has a dog and the other has cats, but that might not be quite as important. Anyway, because I find these comparisons very interesting, and because both movies are around ninety minutes long, this seemed like a natural double feature.

The order of viewing doesn’t particularly matter, but I will discuss them in chronological order. Sunrise was released in 1927, a year frequently regarded as the zenith of silent film and also, ironically, the year that era ended with the release of The Jazz Singer. It has often been written that Sunrise was the culmination of F.W. Murnau’s dream to make the cinema a universal form of communication, telling stories that cross language and cultural barriers. This isn’t mere interpretation; the film’s opening makes it clear. No character or place is given a name in the credits. The principle characters are “The Man,” “The Wife,” and “The Woman from the City.” The next title card states it plainly: “This song of the Man and his Wife is of no place and every place; you might hear it anywhere, at any time.” The film’s ambition is immediately apparent. Just before the talkies enforced barriers between American and foreign films all over again, here was a movie made by a German at a Hollywood studio (Fox), which attempted nothing less than to tie all cultures together in the experience of its simple characters. 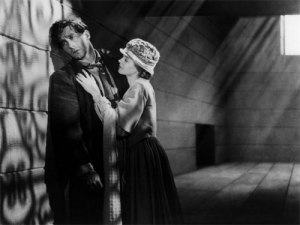 Sunrise is about the entire sweep of a marriage, from its idyllic beginning (told in flashback) to the forces that do everything possible to tear it apart, to final rejuvenation and recommitment. Of course, it’s the second of those three that dominates the length of the film. And those forces opposing the marriage relationship are as serious as can be. This film isn’t about a simple marital squabble. It’s about adultery and attempted uxoricide. If you know something about silent films, this sounds about right. Their style (speaking broadly) tends toward the big, with melodrama, large gestures and emoting. Without the ability to speak, characters must communicate visibly. But more than that is involved here; Murnau is not attempting realism, but a fairy tale. The events symbolically portray everyday struggles and how to overcome them. All the film’s lessons are wrapped in a thrilling story — not “told” but “shown,” as silent film would naturally require. This is how the film attains universality: it takes simple ideas and enlarges them beyond any one person’s particular experience, while the emotions — and this film explores the entire spectrum of them — are universally felt.

Depending on your definition, L’Atalante may be the only feature film of Jean Vigo’s twenty-nine years of life. His second-longest of only four films, Zéro de Conduite, is forty-one minutes long. His entire filmography totals less than three hours — very modest for such a well-regarded figure. “Modest” also serves as a good description for this film. If Sunrise is about primal, life-or-death struggles, then L’Atalante is the opposite. Instead of trying to sum up an entire marriage in one film, it restricts itself to the first few days of a marriage. So interested is Vigo in the quotidian that his film doesn’t actually have much plot to it. It wouldn’t be accurate to label the film simply as “realistic,” however. Vigo was famous for melding realism and surrealism in his style. The result in this case is a film that truly beggars description. Of course, I’m reminded that the great films always do that; no verbal summary could stand in for actually seeing them. But especially with L’Atalante, merely recounting some of the film’s wondrous imagery would work against the pleasures of seeing it for the first time. 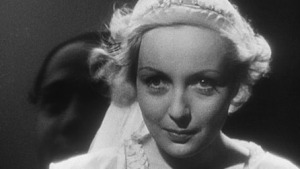 And make no mistake, it is a pleasurable film to watch. Unlike Sunrise (which does have some surprisingly effective humor as it nears its climax), it does not build up the conflict between husband and wife with gradually mounting dread. Vigo takes an almost whimsical approach to how impetuous both of them are. Their fervor swings wildly through feelings of affection, desire, jealousy, and boredom. These feelings don’t result from a character breaking one of the Ten Commandments, only by how close the two people feel to each other and what each would like to do today. There’s subtext, to be sure, but it all boils down to a young couple still getting used to living together. If their fights lead to more dangerous consequences than they should, then both husband and wife clearly regret those fights. More importantly, they get a chance to learn from them as well.

These two films are an excellent example of a point I’ve made on this blog: that movies can be great for different reasons. Both cover some of the same thematic material, but tone and style are very different. Their differences just make them more interesting to watch back-to-back. Also, these movies reveal that film, as well as art in general, really has only a few grand themes (albeit themes that can be subdivided infinitely: e.g. human beings’ relationships to time, nature, God, each other). Of the two, I’d say I like Sunrise better right now, although L’Atalante and I just met; I don’t know it very well yet. But now, finally, we’ve been properly introduced.

POSTSCRIPT: I haven’t been in the ivory tower so long that the outside-the-box nature of these recommendations escaped my notice. I can understand how recommending these two films — a silent movie (without even Chaplin or Keaton to liven things up) AND a French film from the 1930s — would be quite amusing to some people. Some may disregard them on that basis. But I’d encourage anyone with an open mind to give them a try. They’re still being talked and written about circa eighty years later, so they certainly have something valuable to say.

POST-POSTSCRIPT: Apparently what has escaped my notice is that someone with no interest in these films wouldn’t be likely to read all the way to here. C’est la vie.