As we all know, the Walt Disney Company possesses one of the world’s biggest media empires. The company’s reach is global and diverse. Nowhere is this more apparent than in the particular medium for which Disney is still most famous and beloved: the animated feature film. When one considers the greatest and most important animated films produced in this country, the ones that have no connection to Disney can probably be counted on one hand (leaving out animated shorts from the likes of the Fleischers, Warner Bros. [Looney Tunes], and UPA). If it’s also noted that people like Don Bluth, Jeffrey Katzenberg and Brad Bird have worked under the Disney umbrella at one point or another, we’re essentially left with Ralph Bakshi. Even Japan’s Studio Ghibli, the other world superpower of animation, has its films distributed in North America by Disney. In the popular imagination, “animated films” and “Disney films” are practically synonymous.

So when I decided I was going to celebrate the seventy-fifth anniversary of the premiere of Snow White and the Seven Dwarfs by watching every Disney animated feature in chronological order, it was clear that a line had to be drawn somewhere. Even the 51-movie marathon to which I’ve narrowed it down is huge and will take a couple months to complete. There are admittedly some gray areas, at least to my limited understanding, but some exemptions were easy to make. Studio Ghibli films, obviously, were made by Japanese artists. All that Disney contributed is distribution and some big-name stars to dub the characters’ dialogue into English because no one over here can or wants to read. A Studio Ghibli marathon would be richly rewarding in its own right, I’m sure, but that’ll have to wait for another time.

I think the same things can be said for the films of Pixar Animation Studios. Pixar’s connection to Disney predates Toy Story (1995). If, for example, you’re obsessive enough, like me, to have seen the end of the closing credits for Beauty and the Beast, you will have seen the word “Pixar” mentioned. Disney had used Pixar’s technology to add computer animation to its films for a few years, like in the famous ballroom dancing sequence. Subsequently, each of Pixar’s feature films has been distributed by Disney, and the Walt Disney Company finally bought Pixar in 2006. Nevertheless, Pixar retains a distinct identity, standards, and creative team. When Brave was released this summer, it wasn’t greeted as another Disney film, but as another Pixar film. The distinction may be fuzzy in a lot of people’s minds, but it says a lot that Pixar has become so well-known and respected despite the fact that the Disney logo always precedes the Pixar logo.

Ruling out Studio Ghibli and Pixar was quite easy. Eliminating smaller films like The Brave Little Toaster, Valiant, and The Wild, each of which was produced by another studio and simply distributed by Disney, was just as easy. For The Nightmare Before Christmas, Tim Burton and Henry Selick worked with Disney to get it released. Burton’s original idea for the film came when he worked for  Disney in the early 80’s as an animator, but the company didn’t feel the “dark” idea fit well with the Disney brand. Then, after Beetlejuice, Batman, and Edward Scissorhands, Burton had achieved enough prominence for Disney to rethink the project. Still, the company released the film under its subsidiary, Touchstone Pictures. Selick’s next stop-motion film, James and the Giant Peach, was distributed by Walt Disney Pictures, but there remains enough distinction to rule out both films.

Things get a bit murkier when we turn to DisneyToon Studios. This studio, clearly owned by Disney, has actually produced animated films. Many of them have been direct-to-video releases, which are easy to discount. But a few, like DuckTales the Movie, A Goofy Movie, and The Jungle Book 2, were theatrically released. As I look down the list of DisneyToon films, it’s easy to say that I don’t want to subject myself to so many cheap-looking sequels. But ultimately this is a judgment call. Disney itself has never given these films the kind of attention or prestige offered to the films in the so-called Disney Animated Canon. So I can say that the decision has been made for me. 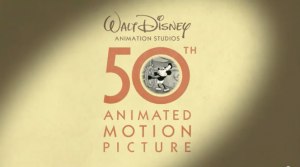 Which leads us to that “canon,” the 51 films I am including in my marathon. When Tangled was released in 2010, Disney made a big deal of its being the studio’s fiftieth animated film. Those “official” fifty were all theatrically-released feature films produced by Walt Disney Productions, later known as Walt Disney Feature Animation and today called Walt Disney Animation Studios. In 2011, Winnie the Pooh became #51, and when Wreck-It Ralph is released this November, that’ll make it 52. (It should be noted that of the five “Winnie the Pooh” movies Disney has released, only The Many Adventures of Winnie the Pooh and Winnie the Pooh [2011] are considered part of the canon, whereas The Tigger Movie, Piglet’s Big Movie, and Pooh’s Heffalump Movie were made by DisneyToon Studios. Maybe someday I’ll be able to adequately parse the difference there.) For better or worse, these are the films that Disney has chosen to hang its hat on. Certainly a few of them are masterpieces of the form, and many of them represent the most sophisticated animation ever created. Plus, they’re movies that I’ve grown up with and enjoyed for as long as I can remember. So this marathon, which I’ve already begun, holds special excitement for me.

In closing, I should also mention those animation/live-action hybrids that have dotted cinema history for as long as animation has existed. Movies like Song of the South (which I wouldn’t be able to get on DVD in North America anyway), Mary Poppins, Pete’s Dragon, Who Framed Roger Rabbit (released by Touchstone), and Enchanted don’t count as part of the canon. What about Fantasia, you may ask. The distinction, arguably unimportant, is that the live-action segments of Fantasia are not part of an ongoing story in which live people interact with cartoon characters (other than that moment when Mickey Mouse shakes Stokowski’s hand). They are, instead, expository interludes. We certainly don’t watch Fantasia to see Deems Taylor talking, but we certainly do watch Who Framed Roger Rabbit to see Bob Hoskins dunk Roger in a sink. Ultimately, again, I defer to Disney’s own official list.

6 responses to “My Trip Through Disney Animation: Why Pixar, et al. Don’t Count”