It was the most extensive movie marathon I’ve ever attempted, more so even than that time I watched silent movies for a month back in 2008. But it was loads of fun, in addition to being a milestone in my lifelong goal of seeing as many different movies as I can. I can now say that I have seen all fifty-two Disney animated feature films. There were only a handful that I strongly disliked, and many that I could appreciate if not love. But here are ten that I know I will return to multiple times in the years to come. They are among my favorite films in any genre or medium. Amazingly, they are movies that I loved as a child and can find new reasons to love as an adult. 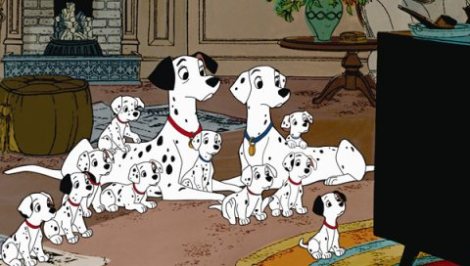 In Disney’s glory days, even the lesser efforts produced at least one immortal character or image, such as the Headless Horseman, the Cheshire Cat, and Tinker Bell. This movie, of course, gave us Cruella de Vil, that skeletal old shrew who could look at a puppy and see only a coat. Cruella is justifiably iconic, both funny and frightening. But she and her theme song are not the only reason to recommend this movie. There’s great humor, a touching story about family, and an imaginative look at canine society (most memorably the London dogs’ long-distance communication). This isn’t among the most flat-out beautiful Disney films, but the animation is expressive and witty.

For sheer ambition in animation, nothing tops Fantasia, but Bambi, while barely half the length of that film, comes the closest. Bambi set the standard for the portrayal of nature in animation. You don’t get much more influential than that. More importantly, Bambi packs in a ton of emotion into a single hour. The sadness of Bambi’s mother’s death comes to mind first, but the movie is mostly about life — the joy of discovery and friendship, the exhilaration of falling in love. Despite its most famous scene, this movie has left a positive impression with millions of viewers. So it is amazing to me that this movie still has room for so much anger against “Man” in his wastefulness and destruction. That anger has slipped into genre cliché by now, but this movie manages to retain its power, and beauty.

I don’t like to throw around the word “underrated,” but in order to defend my choice on this one I feel like I need to. This sequel outdoes the original in just about every particular. The animation is magnificent; the eagle is among the most believable non-anthropomorphic animals Disney ever created. She towers over the desolate Australian landscape. Story-wise, the movie takes a logical, and adorable, step in Bernard and Miss Bianca’s relationship, sending him on a movie-long quest to propose as they search for the missing boy. The voice acting in this film is superb. Even today, Disney animation has produced few theatrically-released sequels, a fact of which I’m quite proud. But making this one was a great decision.

This movie could get away with murder (in fact, I think it does: at one point Yzma kicks a guy off a very, very high platform). Like Sleeping Beauty in 1959, this movie, coming on the heels of the beautiful artistic achievements of the Disney Renaissance, represents a shift in style, with simpler animation dominated by angles instead of curves. But this movie wins us over with its humor, almost all of which still works for me twelve years later. The four main characters were cast extremely well. The jokes leaven the rather obvious morals. But one thing that stood out to me recently is the movie’s simple, unadorned, and perfect representation of ordinary family life. It’s not part of the main plot, but we get to see it here and there, quietly illustrating the theme that, despite all his wealth, the Emperor ought to be jealous of Pacha’s situation.

This was probably my first “favorite movie.” It’s the oldest movie I can remember seeing in a theater, although my memory of that experience is fuzzy. My feelings about Aladdin are not what they once were, but there’s still plenty to enjoy. It is, quite literally, a “wish-fulfillment” kind of story, something to stir the imagination. The theme of learning to be less selfish and appreciating your friends more plays very well. There’s a beautiful moment early on when Aladdin and Jasmine come to realize how they both feel the same about their situations, superficial differences notwithstanding. Robin Williams’ Genie, even though his rapid-fire anachronistic jokes are a little hit-or-miss, brings an infectious momentum to the whole thing. And “A Whole New World” still weaves its spell, however much my adult eyes may roll at it.

CinemaScope! I highly recommend a marathon of at least the Disney animated films up to Lady and the Tramp, so the contrast between those old, square films and this movie’s animated vistas can be truly felt. This is undeniably the most gorgeous Disney movie since Bambi, and coincidentally, this story also takes place over the course of a year. Traditionally, I think of myself as a cat person, but movies, through consistent effort, have very nearly changed my mind. Dogs make infinitely better protagonists, and that’s that. I think that of all Disney movies with talking animals, this one portrays them the best, balancing their human-like qualities and their animal nature. Oh yeah, and the love story surpasses most Disney love stories involving human beings.

This movie was a return, after a couple wilderness decades, to the formula that made Disney synonymous with animated films: fairy tales told with song. In some ways, it represents the perfecting of that formula. What I love about this movie are the songs, the rendering of all the sea creatures, Ariel’s desire for knowledge and empathy as well as romantic love, Prince Eric’s reaction to the statue built for and of him, that time Flotsam and Jetsam smack their heads when Ursula yells their names, the line “Whoa! What a swim!”, AND THE SONGS! Ashman and Menken are probably my favorite songwriting team of all time. They made magic with this one and the next movie on my list. 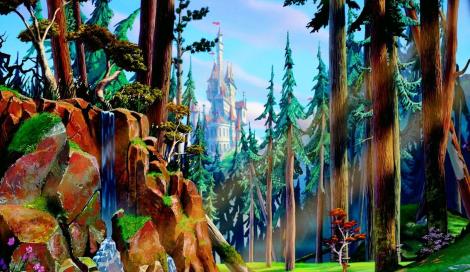 I wrote a blog post earlier focusing on the romance in this film, so I won’t say anything more about that. Luckily, there’s still so much more to say about the movie. It isn’t all serious fantasy, but crams in endless delights as well. The enchanted furniture produces fantastic comic relief. The Ashman/Menken songs are at once melodious and, if you take the time to concentrate on all the lyrics, extraordinarily funny as well. Most of all, there’s Gaston, my pick for the greatest Disney villain — a searing parody of sexism and hyper-masculinity. The character also works as an indictment of the traditional view held by Disney films (and, what the heck, by Western civilization as a whole) that if a man and a woman are the two most physically attractive people in the room, they should end up together. My appreciation for this movie has only grown with time.

Is it kitsch? Obviously, I don’t think so. What it truly is, though, is almost indefinable. There’s no overarching story; each segment stands on its own. But the imagery of the podium, and the power it symbolizes, ties them together. This movie is an exercise in power that’s the animated equivalent of a live-action epic. The Sorcerer’s Apprentice is the most telling segment, with Mickey the obvious stand-in for Walt himself, playing with powers for the first time that he has not yet learned to fully control. This film, much more than Snow White, earns the title “Disney’s Folly.” And yet, what a wonder it is to behold. The music and the images fuse in the viewer’s mind, working together to tell a story or present a mood. In 1940, animation was still so new that the rules were not all written yet. This movie still stands apart because it disregards rules altogether.

Animation brings drawings to life. Fundamentally, every Disney animated film is a celebration of this, whether they anthropomorphize animals, Persian rugs, candelabra, or broomsticks. But nowhere are the two levels of quickening more beautifully expressed than in the marionette Pinocchio. Actually, there are more than two levels. Animators draw Geppetto; Geppetto carves a puppet and brings it to life with strings; the animators draw the Blue Fairy; the Blue Fairy casts a spell that makes Pinocchio move, think and speak on his own. Actually, of course, the animators drew everything, but you see what I’m saying. What these movies are also about is becoming fully human, or getting to a place where one can see oneself as fully human. That’s why they speak to kids so effectively. Pinocchio looks out from the screen at the little boys in the audience and reassures them, “You’re real. You matter. You count. But be good. Whether you succeed in life or not is entirely up to you. It won’t be easy, but it’s worth everything.” This children’s odyssey is the most magical thing Disney ever created, a triumph of cinema and storytelling.

(See also the “Gaffer MacGuffin” discussion on this movie)