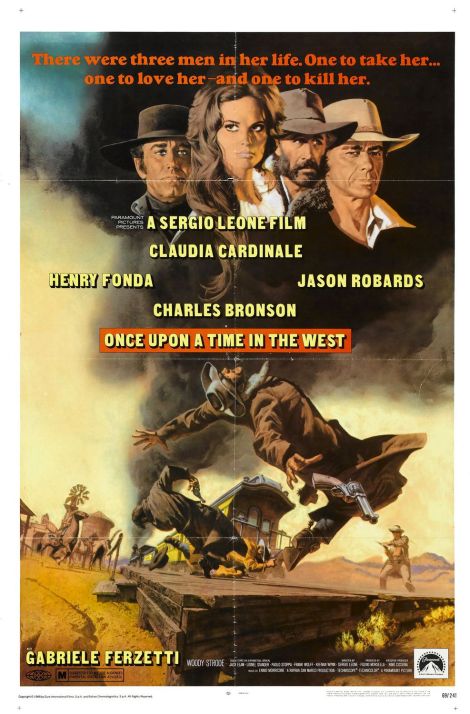 To this day, whenever I want to feel cool, I imagine myself walking along a train station platform wearing a duster.

So begins Sergio Leone’s great dust opera, Once Upon a Time in the West. Three hilariously anonymous gunmen wait for the next train to arrive. There’s supposed to be a man on it they’ve been assigned to kill. During a roughly fifteen-minute period, they wait. One of them, standing at a spot where water continually drips from the ceiling, lets it collect in his hat. Another, having a fly land on his stubble, tries and fails to blow the insect off his face for about a minute before waving it away. What’s going on here, exactly?

It slowly dawns on the audience that what these men are doing is conserving energy. Coiling before the strike. The long opening scene, with practically no dialogue and nothing but the persistent creaking of an old windmill for a soundtrack, is among the most effective build-ups for a character’s entrance I’ve ever seen. And then Leone gives that character, played by Charles Bronson — not one, not two, but three entrances in quick succession. Let’s talk about them, in reverse order.

Sergio Leone, an Italian director making Westerns during the heyday of just such a thing, was head over heels in love with the icons of the American West: the six-shooters, saloons, horses, spurs, dusty streets, card games, shootouts, chases, and spitting. In a Leone film, each of these is treated with an auteurist grandiosity that would never have been tolerated in old-school Hollywood. None more so, however, than the cowboy hat. When a man puts one of those on his head  in a “Spaghetti” Western, he is immediately cloaked in an aura of power and menace. Not only that, but the wide brim conceals the eyes when the wearer is looking down. So Bronson completes his entrance, having already announced his general presence, by showing his face — looking up.

Leone close-ups are legendary. They amply illustrate his commitment not to prettify any of his characters, as classic Hollywood would have done. No wrinkle can hide from his close-ups. But this isn’t as important as the fact that so much storytelling is accomplished with the characters’ eyes. Close-ups trigger flashback scenes, as though the cut takes us through the person’s eyes and into his mind. Claudia Cardinale, who clearly possesses the most pleasant face to look at in the film, makes her entrance in a close-up as well. Her eyes tell her character’s entire story, starting with how heavily made-up they are, a detail that hints at her former life. Traditionally, the close-up acts as the climactic shot of any scene, but Leone took this rule to its extreme — most famously at the end of The Good, the Bad and the Ugly, but just as memorably here.

Pulling back a bit, Leone is also known for his panoramic landscapes. The movie screen had been widening for over a decade, but it’s rarely been wider than it is in this one. Like any good Western, this movie has a lot of exterior scenes, and the width of the frame takes full advantage of the dusty expanse, and the characters’ smallness within it. When it comes to the three male leads of the film, though, each of them commands a great deal of space, so the emptiness around them only highlights this fact. Bronson’s second entrance comes when the train he arrived on exits stage left and he appears from behind it in the center of the frame. The three killers in the foreground turn to look at the small figure in the distance. They outnumber him, of course, but they tense up anyway. 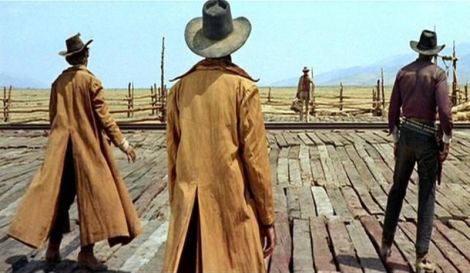 It’s hard to pick one aspect from a film I love as much as this one and call it my favorite, especially since everything works in tandem, but Ennio Morricone’s score stands out. Film scores are not typically allowed to be this catchy, symphonic, and character-driven anymore. The music conveys nail-biting tension, melodramatic sorrow, and whimsical villainy. If you’ve heard it, I’ll bet you can hum the three different parts of the score I’m thinking of based on those descriptions alone. So much of Leone’s style involves deliberate pacing, and in Morricone he found his perfect musical partner. Music and sound effects announce the arrivals of major characters, starting with the very first notes heard in the movie, played by Bronson on his harmonica. The gunmen have turned to leave but stop instantly when they hear it. It’s a simple, ominous tune that Bronson will play many times throughout the course of the movie. Its significance isn’t revealed until the final shootout, and it just happens to explain Bronson’s motivations completely.

The Western genre is a place I love to visit but would never want to live in. In a weird way, I think that’s the reason Once Upon a Time in the West is my favorite film in the genre. The Spaghetti Westerns were nostalgic tributes to classic Westerns, looking at those films lovingly but from a safe remove since the genre was already essentially dead. Young folks tend to think postmodernism, along with everything else, was invented in the 90’s, but this film is positively loaded with movie references. Later Quentin Tarantino came along and started paying tribute to the tribute. The reason Tarantino’s imitators feel so totally empty is that they’re imitations of imitations of imitations. All right, we can go even further back since Shakespeare is quoted in the classic Western My Darling Clementine. And Shakespeare himself adapted pre-existing stories. But anyway. Once Upon a Time in the West is self-consciously a movie about a movie genre. The encroaching railroad brings civilization along with it, which will render men like Harmonica and Henry Fonda’s incredibly nasty villain Frank obsolete. Likewise, twentieth-century technology came along to render the Western obsolete. We’re all playing with space toys now. But bear in mind that Han Solo and Malcolm Reynolds are cowboys too.

4 responses to “My Favorite Movies: Once Upon a Time in the West”