The marathon is nearly over now, so this blog’s regularly scheduled broadcasting will resume this week. I’ll finish up October with the next installments in my “Double Feature” and “My Favorite Movies” series, and then the first post of November will be a Spielberg Marathon recap and top ten list. For right now, though, here are three more reviews I’ve posted on Letterboxd. Spielberg has definitely been worth my time, and it was great to see how all the movies play off each other. But let’s take a look at three of his movies that are not among my favorites.

The Lost World: Jurassic Park (1997) – The cut happens early in the film. At the tender age of nine, before I learned the rules of film editing but had that innate understanding of film language available to anyone who’s seen a number of movies, I felt the cut was weird and wrong. It threw me for a loop. Now I see it again and I know I was right. The first shot is of a woman standing on a beach, screaming at an off-screen event. Previous shots lead us to believe what she sees is the result of a dinosaur attack on her daughter. The film cuts to what looks like a reverse shot: the film’s star, Jeff Goldblum, his eyeline directed where the woman had been. He is yawning. The camera pans back to show that the palm tree behind him is part of a subway advertisement. We aren’t on the beach anymore. This disorienting match cut sets an unfortunate tone for the film. To begin with, there hadn’t been any terror to the opening scene at all. The family on the beach is a dull stereotype: snooty rich people, complete with snooty accents. The woman’s totally unconvincing scream would be right at home in the fake slasher film in Blow Out. The cut only drives the point home: this is a redundant blockbuster sequel, you’ve seen this all before, “Yawn.”

The Lost World does get a little better after that, but it’s mostly preposterous and unnecessary. It tries and fails to recapture the magic of Jurassic Park, itself a more successful attempt to recapture the magic of Spielberg’s earlier films. When the main character gets pulled into the action by the same means as in Indiana Jones and the Last Crusade (he is told that a loved one is already involved with the quest and possibly in mortal danger), the movie seems like a remake of a remake of a remake of a remake. Spielberg can still construct suspenseful sequences that work despite the rampant stupidity that is their direct cause, but everything that this movie does well, James Cameron’s Aliens already did better.

The characters in the first film may not have been very interesting, but the sequel ruins Ian Malcolm. In a supporting role, he had been consistently amusing and was more than adequate as the story’s moral compass. This time around, Goldblum gives a terrible, one-note performance. His sole function, beyond action-movie heroics, is to remind everyone how stupid they’re being. Early on, the film hints that the fallout from Malcolm’s womanizing ways may be an important theme of the story — this is the one thematic element that’s recognizably Spielbergian. But of course the dinosaurs drown it out completely. There is only the most perfunctory father-daughter bonding imaginable to give any personal weight to the proceedings.

So that’s what’s wrong with the film, and it all seems pretty damning. But you know what? I don’t have an especially unpleasant time watching it. It still manages to be energetic enough and amusing enough to keep me from hating it. Having Pete Postlethwaite play a big game hunter certainly helps. If this is Spielberg’s worst film, then it bears remembering that the worst film by a great director can’t be worthless. [Edit: Having since caught up with all of Spielberg’s films that I hadn’t seen before, I can say that this is definitely not his worst film. See: next review] 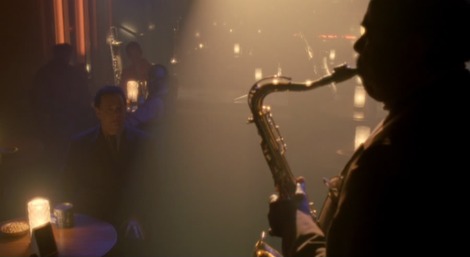 The Terminal (2004) – It’s torture to watch. That sounds extreme, but I really couldn’t stand this movie for all but a few scattered moments of its two-hour running time. I think this might be the worst movie Steven Spielberg is capable of making. His other bad films at least have some genuine sweetness to them (Always), an exuberant cast capable of creating laughs on its own (1941), or memorable moments of either suspense (The Lost World: Jurassic Park) or horror (Indiana Jones and the Temple of Doom). In The Terminal I see a painfully calculated and forced comedy with a little purely formulaic romance on the side, a film that takes an intriguing premise and spins a totally forgettable story from it. Honestly, the only thing I’ll remember might be the bit with the carts and the quarters.

I question the casting of Tom Hanks in this film. It seems a pretty unvarnished attempt to win the audience’s sympathy for a foreign character. This would be in line with everything else about the film, each element clearly telling us how to feel about everything. The tone is unnaturally buoyant, with little room for actual tragedy. Very little ever seems to be at stake for the main character beyond the nuisance of learning to live in an airport. Spielberg has made missteps, to be sure, but before seeing this film I didn’t know he was capable of being boring.

War Horse (2011) – This feels like inherently sentimental material to me; thus, Spielberg handles it as well as anyone could. But he’s indulging himself; the “Spielberg Face,” after a decade of films that critique the idea, is back in full force. The film exploits to the fullest the tendency of American audiences to accept the deaths of dozens of human characters so long as an animal they’ve come to care about gets out all right. Every character in this story, after all, operates under that same philosophy. This is most unbearable in the opening scenes, during which Ted Naracott and his son Albert repeatedly make foolish decisions that the film treats as savant-like insights. The audience fully sympathizes with them because this horse is going to become War Horse, don’t you know.

When the war actually begins, the sentimentality gets complicated somewhat, but take a step back and look at all the characters in this movie. With only a couple mustache-twirling exceptions, every one of them is fundamentally decent and lovable. Yes, it is good to see sympathy extended to characters on both sides of the conflict, but we have a century of separation from this particular conflict with which to ease our placing ourselves on the side of peace and brotherhood. Spielberg conspicuously declined to render German characters this way in Saving Private Ryan. The episodic nature of the story necessarily reduces the characters to broad sketches, but this is a Thomas Kinkade portrait of the human race. It doesn’t help that John Williams turns in one of the most treacly scores of his career, and this after a great decade of supplying Spielberg with interesting and/or low-key music.

With all that said, I find myself willing to give the movie something of a pass because it’s just so freaking beautiful. Take any frame of this film, blow it up, and I’ll hang it on my wall. Spielberg shines when the movie gets to the trenches, with a powerful blast of terror and death that highlights the devaluation of individuals required by this war strategy. The look and feel of the film is old-fashioned in the best ways. At the end, the movie attempts an It’s a Wonderful Life moment when many of the people whose lives were touched by this horse converge to try and save it. It’s then we realize that Joey is no George Bailey, or any other kind of character, really — just a blank slate. But the sequence still almost works, with its earnestness and a sense of battered lives reaching for comfort. Then I recognize that the movie is telling me to cry, and I snap out of it.