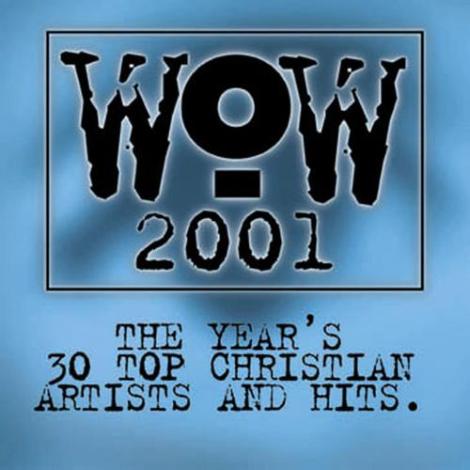 Few things that I heard in college have stuck with me better than what a professor in a music appreciation class my freshman year said about the development of musical taste; namely, that ages nine to fifteen are the crucial years. It’s during that period that we discover the kinds of music we will love most fervently all our lives. As adults, we have more difficulty embracing the new, comparing it unfavorably to the music of our formative years. Everyone develops differently, of course, and there are exceptions to every rule. But I’ve spent a lot of time over the years exploring different types of music. I’ve sampled a bit of everything. And the period from November 24, 1996 to November 23, 2003 remains — easily — the most important of my life when it comes to music.

Last week, when I decided to play WOW Hits 2001 in my car on my way to and from work, I was reminded of that class. I work at a Christian bookstore, so I’ve heard the last several WOWs many, many times. Overexposure typically leads to disenchantment, and it’s difficult to know how big a factor that is. Plus, I’m working when I listen, as opposed to relaxing and concentrating on the music. At any rate, I’ve gotten progressively less interested in these annual double albums, just as I’ve gotten less interested in Contemporary Christian Music (CCM) in general. When I heard 2001 again, though, I found that I still love it. This is music that I’m very familiar and comfortable with.

WOW Hits 2001 came out in the fall of 2000, just a few months after the epicenter of that nine-to-fifteen range. It was the first WOW I owned on CD, having finally made the switch from audiocassettes around that time. (My discovery of iTunes was comparatively cutting-edge, coming five years later.) It was also the first with the word hits in the title, to distinguish it from other series like WOW Gospel and WOW Worship. I didn’t know anything about those series at the time. I considered it a big enough step to see a bigger picture of the most popular acts in CCM. Before WOW, I only knew about what my dad listened to.

My discoveries during these years were like charting the scope of the solar system. Only later could I comprehend that there was a whole universe outside what I knew. But hey, the solar system is important because it’s home. CCM is one of the bigger planets in my solar system, along with mainstream hip-hop, r&b, pop, and alternative rock. They all coalesced around me during this 1996-2003 period. That might be the secret to why music from that period sticks with me: it feels like home.

So how about WOW Hits 2001 in particular? It has all the strengths and weaknesses common to compilation albums of this type. There’s no filler, and many of the tracks are quite strong. On the other hand, it’s pretty scattershot, and the tracks could be played in any order. The strengths and weaknesses inherent to CCM are also on display. Often there is a genuine sense of fidelity to Scripture and a passion for worship. On the other hand, there are plenty of times when the product feels like a “healthier” alternative to mainstream genres, with all of the best elements borrowed from other sources — and not just the music, but the lyrics as well. In recent years, I’ve become familiar with the complaint against CCM that many of its lyrics bear a striking resemblance to secular love songs, with signifiers (sometimes, not even distinct ones like “God” or “Jesus”) slipped in to make the song about a different kind of love. It can be quite appropriate to approach our Lord and Savior with a sense of intimacy. But making our relationship with him sound like one between boyfriend and girlfriend is a bit problematic.

There are songs here that I love in spite of their lyrics, “Crystal Clear” by Jaci Velasquez being the shining example. Although “heart with a splinter” is a great phrase, the rest of the song definitely gets into the problematic territory I just mentioned. Plus One’s “Written on My Heart” is one of my favorite boy band songs, but there’s no denying that ‘N Sync could have sung it in almost exactly the same form. At the other end of the spectrum is a song like Nichole Nordeman’s “Every Season,” which is just a lovely poem even before you factor in her potent delivery. Nicole C. Mullen, Third Day, and Delirious? all manage to put an indelible stamp on particular passages of Scripture. The latter’s “God You Are My God” is a fairly ingenious blend of medieval plainchant with a modern praise chorus. “Dive,” by Steven Curtis Chapman, is also great, resting on a rich metaphor and bursting with excitement. It might be Chapman’s definitive statement as an artist. Standing head and shoulders above everything else, though, is Jennifer Knapp’s “Into You,” one of my all-time favorite songs. It’s an intensely personal work, filled with swaggering menace that gives way to an earnest prayer. And it gets the job done in just over three minutes.

My use of iTunes has gone a long way toward making the WOW albums obsolete. Even without that, they are a curious animal: sprawling, hit-filled double albums that are designed to be replaced after a year. There’s value, even beyond nostalgia, in taking another look at something like that. The WOW albums are a snapshot of an industry, its self-image and the messages it wants to convey. These albums came into my life at the right time to capture my imagination. They helped open doors, and I remain grateful for that.