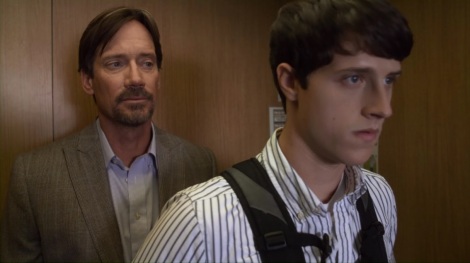 I wasn’t able to go into this movie with an entirely open mind. Typically skeptical of faith-based movies (they tend to be mediocre and didactic), I was especially wary of this one. Start with the title. For one thing, it telegraphs the ultimate message of the movie, leaving no doubt about the conclusions it will draw from its central question. Other recent movies, like The Dark Knight Rises and Dawn of the Planet of the Apes, might be said to give away the ending with their titles, but those titles leave some room for nuance. “God’s not dead” is a closed statement, and a weak one at that. For me, it conjures images of God on life support, bravely hanging on. To top everything off, the title is a direct reference to (1) an apologetics book, (2) a song, and (3) the accompanying Newsboys album — all of which make an appearance in the film itself. Not just propaganda, in other words, but an entire multimedia campaign of propaganda. I simply wasn’t interested. So I felt free to read a little about the movie from sources I trusted. Coming across pieces like this and this made me even more biased against the film. But as months went by, I realized I couldn’t ignore it. I work in a Christian bookstore; I interact every day with people who think this movie is great. For a while, I was content to tell customers that I hadn’t seen the movie “yet.” But my bias kept growing to the point where I decided I needed to give it a shot. What would I make of the movie itself, not just my own assumptions about the movie?

In a single paragraph, I’ve been more honest about human foibles and prejudices than God’s Not Dead is in two hours. Let’s put aside the specific message of the film for a moment, to get a better look at its spectacular failures of storytelling.

One measure of a good movie character is the sense of a life outside the edges of the frame and on either end of the movie’s running time. The opposite of this is a character whose sole purpose is to advance the plot, stir up conflict when it’s needed, or be a foil for the protagonist. God’s Not Dead serves up three — count ’em, three — romantic relationships that offer zero evidence of having ever worked. They are depicted only for the sake of watching them fall apart. This is a flaw on the face of it, but the movie also uses these relationships to hammer home its agenda: presenting non-Christians as selfish, arrogant, vicious people. Most damning is the relationship between the main character, Josh, and his girlfriend Kara. They’re both Christians, but they break up when she tells him he shouldn’t risk his academic future by standing up to an atheist philosophy professor. She doesn’t even abandon her faith; she just has insufficient zeal. For that, she’s banished from the movie, whereas the characters in the other two relationships are given moments of redemption by the end.

Whenever realistic drama threatens to break out, this film aggressively shuns it in favor of caricature, contrivance, and moralizing. My favorite character, Amy, is an animal-rights activist blogger involved in another of those relationships I mentioned. Her entrance is the film’s high point. She oversleeps because her alarm clock has reset. Nothing fancy there, just a simple dramatic device to inspire sympathy. From there, the movie shoves her “liberal” bumper stickers into the foreground, saddles her with a verbally abusive boyfriend, and gives her cancer. Oh, and she also gets talked down to by the two groups of celebrity cameo performers. In another subplot, Ayisha, a girl from a fundamentalist Muslim family, tries to leave her sheltered upbringing. Early in the film, her father explains that in American culture, “there is no one who worships God.” Ostensibly, Muslims would be on the same side of the “theism vs. atheism” argument as the filmmakers. Showing their faith in a sympathetic light would be a pleasant surprise from an evangelical film. This doesn’t happen. The girl turns out to be a closet Christian, gets exposed by her Hitler Youth little brother, and is immediately disowned by her father. Finally, there’s Professor Radisson, the main antagonist. In his first scene, he is erudite and funny — someone from whom a freshman could learn a lot. When he gives his atheistic ultimatum, however, he quickly becomes nothing more than a bully. His backstory, far from making the character more interesting, reduces his non-belief to a facade, resting on personal anger against God rather than intellectual rigor. There might be some truth to his statement that the most committed atheists were once Christians who finally became disillusioned with the faith, but the movie is only interested in this idea insofar as it can be used to corner the professor. The movie ends by killing him off with a (practically literal) deus ex machina and giving him a deathbed conversion. This is awful on a number of levels, not least of which is the fact that the philosophy course is now over. Josh has proved the existence of God, literally convincing every single student. He doesn’t need to learn anything about philosophy now. He doesn’t need to learn anything about anything.

Here’s the movie’s biggest problem, and it’s one that angers me not only as a lover of films, but as a Christian. This film is poorly written, dramatically inert, and visually clichéd — and it’s also un-Christian. Why? Because its protagonist is an obvious Christ figure who never needs to die, not even symbolically. Here the failure of drama dovetails with the failure of witness. At the beginning, Josh goes through the motions of doubting his decision to argue with his professor. But he already knows what he wants to do; he just needs a pastor to assure him that God wants the exact same thing. Seriously, God and Josh are on the same page throughout the film. Other characters warn Josh a few times that he’s committing “academic suicide,” but nothing of the sort ever happens to him. Losing some academic privileges isn’t even much of a sacrifice, but Josh loses nothing. He gets everything he wants without really having to sacrifice anything or grow in any way. At the end of the movie, he is publicly celebrated at a Newsboys concert. It’s even implied that he gets a new, hotter girlfriend. I’m sorry if that’s crude, but this is a crude movie.

So, there you go. I’ve trashed the movie, just as I knew I would. But I really have gained something from the experience. I can see now why this movie is so popular. As expected, it preaches to the choir, patting its intended viewers on the back for what they already believe while humiliating all those secular liberal intellectuals out there. It’s a comfortable fantasy for some. The movie also presents Christian belief as a package deal with political and cultural conservatism. True Christians love Duck Dynasty and Newsboys. The climactic moment — in which a stadium full of people sends out a mass text saying (of all things) “God’s not dead” — doesn’t exactly portray Christians as people who know how to think for themselves. Thus the entire thesis of the film is contradicted. I could go on. This movie makes me angry as few films ever have. It clumsily inserts cancer and dementia into the story, not as profound human tragedies, but as argumentative devices that put unbelievers into a spiritual headlock until they cry uncle. This is not what Christianity is for, and it’s not what movies are for, either.