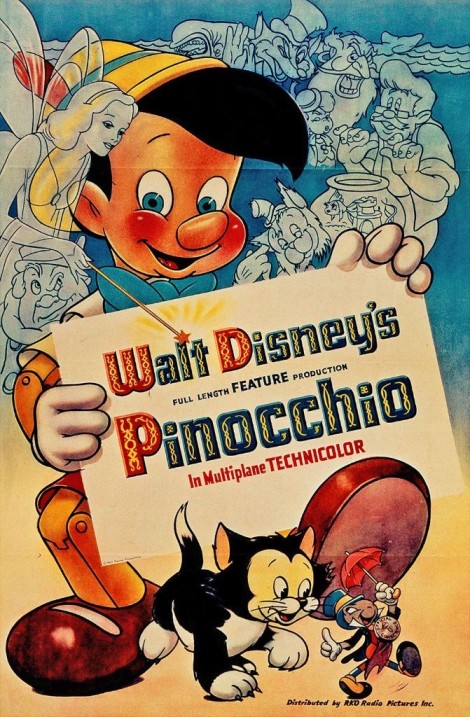 He looked up and said, “I see people; they look like trees walking around.”

Despite its reputation as a uniquely harsh and frightening film from a studio best known for sanitizing fairy tales, I find the influence of Pinocchio to be alive and well in many of the later Disney films that I love the most. Along with the epochal Snow White and the Seven Dwarfs, Pinocchio set the template: musical fables in which an earnest young hero/heroine sets forth to claim an identity with the aid of adorable sidekicks. Though the formula comes across as watered-down and self-conscious these days, as recently as the 90s (the “Disney Renaissance”) the strengths of Walt Disney’s first masterpieces were still being profitably harvested. But while Pinocchio has had a lasting influence, there is ultimately nothing else quite like it. It’s like a typical Disney movie, only more so. 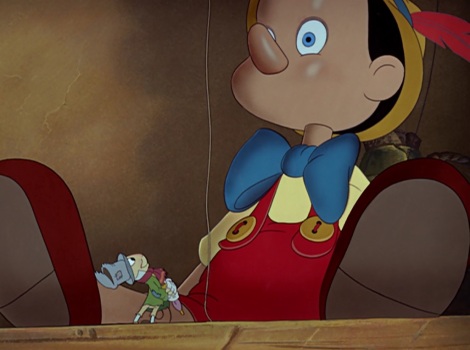 For instance, it’s practically unthinkable that a cute animal sidekick in a Disney film would say to the hero, “Oh yeah, almost forgot about you.” Practically unthinkable, except that the very first such character, Jiminy Cricket, says exactly that. This diminutive gadabout is the hero of his own story, with an explicit goal (a medal) and a tendency to do what he wants when Pinocchio won’t listen to him. How many animated characters, sidekick or not, have been granted both the opening song and a POV shot at the very beginning of the story? There’s really only one other character of this type who can boast similarly independent desires and ambitions: Sebastian from The Little Mermaid (incidentally, my second favorite Disney sidekick). Sebastian’s failed attempt at being Ariel’s conscience is a clear parallel. There’s also a shared image: Sebastian bouncing on an accordion recalling Jiminy dangling from the edge of a coil spring. They each sway back and forth, knocked off-balance by the unexpected predicaments of the people they’re looking after.

The existential panic of the title character also finds a descendant in The Little Mermaid. Both Pinocchio and Ariel make the changeover from nonhuman to human in two steps, needing to fulfill a task in order to complete the transformation. Ariel is merely trading one society for another, but Pinocchio emerges from nothingness. He tries to interact with his lifeless stagemates in Stromboli’s show, while singing of his independence from the impresario’s power. Later, he’ll be locked into a birdcage, watching a lightning flash cast a deathly pallor on the other marionettes hanging from the ceiling. In his quest to become human, Pinocchio discovers that the adults outside his family unit won’t hesitate to treat him like an object, exploiting and degrading him at every opportunity. These villains range from the comical to the monstrous, with Honest John and Gideon (the Harpo to his Groucho, the Teller to his Penn) on one end and the coachman and Monstro on the other. Ariel, meanwhile, learns that humans aren’t all bad.

Beauty and the Beast is another film that owes something to Pinocchio, particularly its flashes of grotesquerie. The coachman leans into the camera and briefly turns into a devil as he says, “They never come back — as boys!” Monsieur D’Arque, keeper of the asylum, likewise leans forward with a diabolical gleam in his eyes when he says of Gaston’s plan, “Oh, that is despicable. I love it!” From these points on, the two films complement each other. Pleasure Island transforms boys into donkeys so they can be either shipped to salt mines and circuses or lashed to the coach that will bring the next batch of boys to the island, perpetuating the cycle. In Beauty and the Beast, the prince’s servants, made even lower than animals, fight the invading townsfolk in order to reclaim their humanity. Pinocchio himself narrowly escapes being turned into a beast. 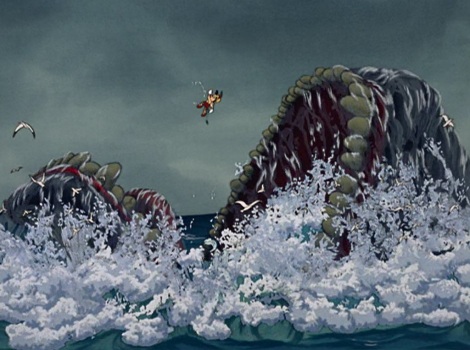 Like Belle, Pinocchio has a kindly old tinkerer for a father. Whereas Maurice is a crackpot whom everyone in the village is quick to dismiss, Geppetto is a beloved fixture in his own town — a maker of elaborate clocks, music boxes, and toys. He also suffers from crippling loneliness despite the success of his trade. Almost everything in his cozy cottage/workshop has a face, including his bedside candlestick. Pinocchio, a charming puppet with a broad smile, is his finest accomplishment even before the Blue Fairy grants his wish. In this film and Beauty and the Beast, the child eventually becomes the parent, rescuing the rescuer. Geppetto literally goes out to rescue his lost child, of course, while Maurice simply takes his invention to a fair to support his family financially. But they are each swallowed up into a dark, frightening place, and their children follow without thinking twice.

The Judeo-Christian morality of Pinocchio has always been a comfort. A little Dante here, a little Bunyan there. There’s something quasi-Trinitarian about the wishing star, the Blue Fairy, and the dove that descends from the star to inform Pinocchio about Monstro and is never otherwise seen or mentioned. Above all, this is the story of a dead thing granted life. But that life is seen through a glass, darkly, and Pinocchio has to die before rising to a new, glorified life. He claims his inheritance not by living sinlessly, but by demonstrating (and accepting) love. Love is the pivot point for all the great Disney films. As it is with Ariel, Pinocchio’s final test is to face the ancient fury of the sea itself. More than any other Disney protagonist, however, Pinocchio’s coming-of-age is complete, transformative, and inspiring. Not even a raging Leviathan will stop him. In the fantasy genre, Pinocchio faces just about as many near-death experiences as either Frodo Baggins or Luke Skywalker. The “Disney Death” trope has certainly lost its potency over the decades, but the sight of a little boy face-down in a tide pool remains shocking. This movie takes its audience all the way to the brink, then restores us to the safety of home and family, the happiest of endings.

4 responses to “My Favorite Movies: Pinocchio”