(Prefatory note: My idea of selecting movies at random for this feature hasn’t really paid off yet. The movie I’ll be talking about came out in 2000, making it the second-oldest one I’ve covered in this series. Of course, when I look at the list of all the movies I’ve seen, I find that almost a third of them came out in 2000 or later. So who’s surprised at this outcome? Not me.)

I’m sure I saw this movie for the first time at some point in the last ten or twelve years. It couldn’t have been earlier than that because Proof of Life is rated R. In my parents’ home, R-rated films were forbidden when my siblings and I were under seventeen, and with the very rare exception, my parents avoid them altogether to this day. This movie is one of those exceptions, falling as it does under the tidy category of a “Dad movie” — an action film about a competent male hero who solves interesting problems with his brains and his bullets alike. I saw this film a second time, again with my father, about four years ago. Giving it 3 ½ stars, I must have enjoyed it more than I expected, because this is not the type of movie I would have sought out on my own at the time. As a younger cinephile, I was disposed toward sneering at this particular genre. That phase has passed, I think.

Russell Crowe and — to a lesser extent — Meg Ryan are what make Proof of Life worth watching. They bring characters who’ve been placed in stock situations to life, and they inspire both sympathy and trust. Their chemistry even makes the script’s tentative, half-baked ideas of an illicit romance feel meaningful. Real-life incidents are tough to ignore when they mirror a film’s plot so closely, but even if we leave Dennis Quaid out of it, the film’s most interesting subtext is that, rescue or not, the marriage of Peter and Alice Bowman is probably on its last legs. Crowe plays the potential homewrecker with such brooding authority, combined with genuine enjoyment of his work (an essential trait in any action hero), to make it practically impossible to accuse him of seducing anybody. Ryan, being a woman, is given much less to work with, but she brings out the conflicting emotions above and beyond the call of duty.

The rest of the characters, unfortunately, came right off the assembly line. Alice’s sister-in-law, played by Pamela Reed, is around only to interrupt Crowe every five minutes with some variation of “Slow down, I have no idea what you’re saying.” According to Roger Ebert’s Economy of Characters rule, she should be the secret villain, but instead she’s simply shipped back to America when everyone realizes she’s useless. Elsewhere, there’s David Caruso as the macho, vulgar Green Beret, Gottfried John as the jungle-crazed missionary, Anthony Heald as the sniveling executive. As Peter, David Morse is more interesting than the rest, coming to terms with the discrepancy between his idealism and political reality. But there’s not much to his character besides that — a man who’s just trying to help and finds out his help isn’t wanted. 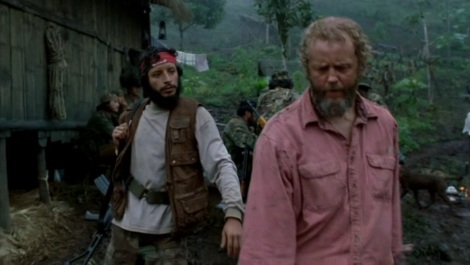 The topical themes of the story certainly haven’t gotten any less relevant, seeing as they circle the subjects of oil and terrorism so explicitly. But in a post-9/11 world, they don’t look very insightful. The villains in Proof of Life are boring. They want money, and kidnapping is a lucrative business. That’s it. No deeper conspiracy is uncovered at any point; everyone is basically what they appear to be. The white man will save the day, locals are not to be trusted, the (fictional) South American country is dangerous and backward, and Americans will be safer if they just stay in America. I don’t think it’s a coincidence that the most striking images in the film, a series of gorgeous landscape shots, appear over the closing credits. Feel free to enjoy this exotic place, as long as you’re looking at it in your rear-view mirror.

The film may not have a lot of meat on its bones, but it’s exciting enough to carry me along for a good two hours. The politics don’t even matter all that much, because the movie is much more interested in procedure. As the title suggests, it’s all about the specific goals of a kidnapping negotiation, how both sides will posture and bluff until they’ve reached a point where they both think they’ve won. We’re never given the perspective of the man on the other end of the radio from Crowe, but we are given the perspective of the kidnapped man, revealing that he’s alive but struggling throughout the negotiation. At one point, the movie wants us to think he’s been killed, but it’s easy to share Crowe’s doubts, and the sleight of hand doesn’t last. These POV decisions dictate how the audience will react to the conflict. They’re not the most interesting decisions possible, but they work. The best thing I can say about the movie as a whole is that it also works. That sounds like a 3-star movie to me, so I will redesignate it as such.