It’s been a while since I’ve sung the praises of the moviegoing experience on this blog. In part that’s because I don’t want to be a hypocrite. Well over ninety percent of my first-time viewings this year have been at home; I’ve set foot in a movie theater a little more than once a month. This lackluster performance will improve when I feel like I can slow down on my comprehensive viewing of older films. Until then, I have to reach into the reserves of my memory to make the case for watching a movie in a theater. Besides the communal experience, in which emotions are shared and amplified in a crowd or even a small group, there’s the sheer size that no home theater can match. When I look up at the big screen, it’s much harder to get distracted and much easier to lose track of time than it can ever be at home. This sense of envelopment, plus the necessity of arriving at a scheduled time, serves to make movie theater memories uniquely indelible. So it’s no surprise that, reaching back to my earliest memories, I can recall watching specific movies in the theater, whereas the particular times when I’d watch a VHS tape are a total blank.

One of the first things I ever learned about movies is that memory can’t retain them perfectly. If you watch the same movie again just a few months later, you’ll see a scene and notice that it looks a little different than you remembered. The snapshots our brains produce can be a little spotty, but when the brain seizes on a particular image, it can hold it for a very long time. There are a few images from the first ten years of my life that I can readily summon even today. These images are housed in films of varying quality, to say the least. I had no powers of discrimination back then, no vocabulary to describe what these individual shots were doing to me. I just knew they were doing something. Now, some twenty-odd years later, I’ll take a look back and see what I come up with. 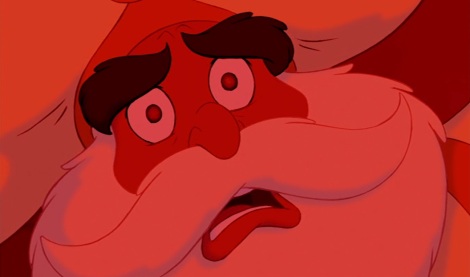 The first movie I remember seeing in a theater is Disney’s Aladdin. I was five. The film soon became a personal favorite, something to claim for my very own. The clamshell VHS I received from my grandmother for my birthday the next year was probably responsible for this, and it probably helped cement the initial memory. But I can still clearly remember the effect of watching the scene when Jafar hypnotizes the sultan with his cobra scepter and the entire screen goes red. Theater-filling red. Watch the scene on a TV, and it’s an interesting aesthetic choice. Watch it on the big screen, before the very concept of the big screen has become familiar to a young mind, and — well, I was basically hypnotized too. At the time, I couldn’t even verbalize this basic connection between myself and the screen, but there it was, pulling me in.

I know, I know: Enough about Babe, already! When I first wrote about the 1995 movie for this blog, I mentioned this idea of indelible images. There’s not much more to say about that sinister taillight that flares like HAL 9000’s eye (the power of red, again), piercing the “cruel and sunless world” of the pigs. Since this was one of the first live-action movies I remember seeing in a theater, the crispness of the late Andrew Lesnie’s cinematography made a definite impression. Earlier this year, I discovered just how much of the effect is lost when you watch the film, not only on TV, but on a newer TV with motion-smoothing. It’s my duty to take this moment to remind anyone reading this to turn that crap off.

For the third movie, I must bow to the caprices of time. Disney’s 1940 animated film Pinocchio is, as I’ve mentioned, one of my favorite movies of all time. In no particular is the live-action 1996 film The Adventures of Pinocchio even in the same league. It’s a fairly hideous movie, in fact. But I’ve never seen the Disney film on the big screen. (Someday, someday.) So I’ll never know if the original Monstro would have been seared into my memory in the same way that the ridiculous-looking whale in this film was. It’s all thanks to a simple overhead shot, the kind that is frequently passed around on the internet because it’s always impressive and terrifying. There’s a tiny boat on the surface of the water, and beneath the surface there’s an overwhelming dark shape. Insert Jaws quote here. It’s an incredible shot, I’ll give the movie that much. This is the most literal example from my childhood of cinema’s bigness. 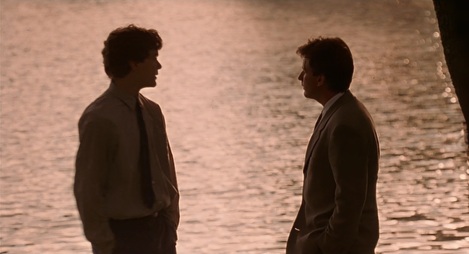 My last example came out a little later in the same year as The Adventures of Pinocchio. It’s D3: The Mighty Ducks, the only film in that trilogy that I saw in a theater. The shot in question isn’t nearly as impressive or interesting as the other three I’ve mentioned, so I’m somewhat mystified by its staying power in my memory. As in the Aladdin shot, a single color dominates the frame. That effect is pretty rare in the movies I’ve seen, and certainly when I was eight years old there was still a shock factor to it. Seeing Joshua Jackson grow up in these movies helped my young mind grasp the concept of aging for the first time. Here, on the big screen standing eye-to-eye with his coach, he wasn’t a kid anymore. I maintain that the third movie is the best and most mature in the series, minor accomplishment though that may be.

It would be quite a stretch to say these movies made me a cinephile. Rather, it was in the second decade of my life, when I watched things like Citizen Kane and 2001: A Space Odyssey and Pulp Fiction, that the spark was well and truly lit. But everybody talks about those movies and how they opened the cinematic floodgates. D3: The Mighty Ducks, by contrast, is probably never mentioned as a gateway to anything. Still, it’s useful to look even further back than my intellectual awakening, to a time before I knew what to do with this art form — when a kids’ movie, whether great or mediocre, had the power to entrance.