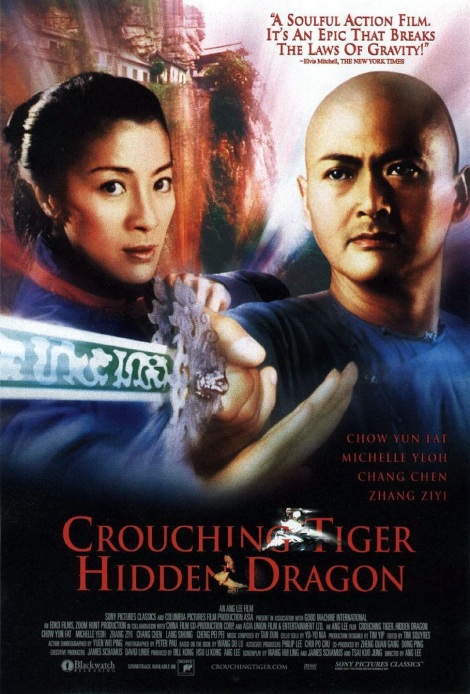 One of the most breathtaking things about movies, going back to their earliest days, is their capacity for making the impossible real. Whether this simply means bringing a long-forgotten past back to life, or populating the frame with fantastical creatures and objects, the idea is that the screen becomes a window into a world we can’t touch. Film history is loaded with jaw-dropping milestones. One of these came in the year 2000, when a film about eighteenth-century China, with all dialogue spoken in Mandarin, became the twelfth-highest grossing movie in the United States from that year and earned an Oscar nomination for Best Picture. (No foreign-language film made the top 100 for domestic box office last year.) Also, that film featured wire stunts that rendered its martial artists believably superhuman. Which feat is more incredible?

At this point, I’ve only seen four wuxia films, and Crouching Tiger, Hidden Dragon is the second-oldest (newer only than Ashes of Time). That basically covers the brief vogue at the beginning of the century, so there’s undoubtedly a rich history for me to uncover. Until I do, Ang Lee’s single foray into the genre remains the gold standard. With action choreography by Yuen Woo-ping, who had already broken through to American audiences with his work on The Matrix the year before, Crouching Tiger is the rare movie for which the term “high-flying” is a literal descriptor. Exaggerating the graceful techniques of qinggong, the film allows its characters to leap great distances, stand on tree branches, and run on walls. They do so with such understated, perfectly silent skill, and Lee captures it all with such a no-frills classical style, that I buy it instantly. The special effects are practical and have aged very well (the wires were digitally removed). Even the more familiar moves of the sword fights have a terrific energy and fluidity to them, leaving the impression of a martial art (emphasis on “art”) at its peak.

But I’m doing something the movie is careful not to do, which is lead off with the action before telling the story. The opening scenes quietly immerse the viewer in a different world, where life moves to different rhythms and characters navigate a culture of chivalry that’s unique but still slightly familiar to the West. The warrior Li Mu Bai (Chow Yun-fat) is on the cusp of retirement and wants to give away his legendary sword, the “Green Destiny.” He meets up with an old friend, Shu Lien (Michelle Yeoh), whom he has always loved but never pursued out of deference to her departed husband. She wants him, he wants her, but tradition and the fighter’s lifestyle hold them back. The story moves from rural China to the capital, Beijing, when the sword is stolen and Li’s sworn enemy, Jade Fox (Cheng Pei-pei), comes out of hiding.

The thief turns out to be Jen Yu (Zhang Ziyi), the daughter of a Manchu nobleman who finds herself similarly shackled to tradition but is more proactive in overcoming it, if only under cover of darkness. Li’s backstory was fleshed out with dialogue, but Jen has a number of flashback scenes devoted to hers — appropriate for the character who ties all the story’s strands together. Facing the servitude of an arranged marriage, Jen secretly apprentices under Jade Fox while harboring illicit love for the bandit called Dark Cloud (Chang Chen). The flashbacks to their desert courtship might be the most lyrical and emotionally potent scenes in the whole movie, without containing any of the aforementioned calling cards. It’s a tempestuous relationship, each party testing the other’s endurance until they recognize each other as equals. Finally, in a variation on the old adage “if you love something, set it free,” he lets her return to her family. Cut back to the present, when he finds her in Beijing just before her wedding.

So the movie gets all this narrative stuff explained — with some of the dialogue feeling lost in translation, such as the line from which the English title is derived — before letting it play out with a series of supple fight scenes. Jade Fox bears a lifetime of resentment for a lack of respect due to her gender. Li wants to kill her to avenge the murder of his master. Jen hopes to surpass all her elders, fighting with a somewhat directionless rage. Shu Lien is bound by honor to see that the social order is maintained. They take their swords, spears, and machetes to the courtyards, alleys, and surrounding forests. Sometimes a hapless guard will get in the way. The Dissolve‘s David Ehrlich called Crouching Tiger a dance film, writing that the combat becomes “less about harm than expression.” These characters learn about each other through martial arts. When they genuinely want to kill each other, they do it quickly; when Li proposes he can snatch his sword away from Jen in three moves, he actually does it in one. The acrobatics are never divorced from the story.

This film became such an international success not only because of its thrilling action, but because its resonant yet muted story strikes so many familiar notes. There’s a Shakespearean quality to the two romances: Jen and Dark Cloud call The Taming of the Shrew to mind, while Li Mu Bai and Shu Lien’s arc contains traces of both Romeo and Juliet and Hamlet. The latter are victims not only of social pressures but simple bad luck and the failure to pounce on an opportunity before it’s too late. The whole movie is about the difficulties of being a woman under a patriarchal system, which might reflect Western influence. But there are Buddhist elements as well, particularly an emphasis on letting go of the things we treasure the most. It all comes together in the mystical, ambiguous ending. The two generations fold in on each other with the ultimate act of sacrificing love out of love. Flying becomes falling. It doesn’t entirely make sense, but it’s as beautiful as anything I’ve ever seen.