This movie’s entrée into the world preceded my own by about two months (the U.S. premiere happened 28 years ago today). But since it didn’t really hit its stride as a pop culture touchstone until it arrived on home video, there’s no question that it belongs to my generation. The exact circumstances of my first viewing of the film are hazy in my mind, but I distinctly remember my older sister borrowing it from the library once, years before. I’m fairly certain I didn’t watch it with her, but the title stuck with me. I mention this because, as more than one home video release has emphasized, The Princess Bride is meant to appeal to both boys and girls. It does so by playing to stereotypes: boys are in it for the swords, girls for the kissing. Each side is expected to make some concessions for the other. But I’ve lately come to realize that the only people the movie is trying to convince of anything are the boys. Girls’ participation is taken for granted; the film’s title is, rather bluntly, delivered right to them. This movie remains special for me — a man, given to more or less manly interests — for the simple, uncritical reason that it’s basically about me.

The framing device is critical. It establishes the film’s somewhat detached tone, granting the audience a surrogate who shares our presumed skepticism about swashbuckling fantasy romance. This is how the movie pulls off its neatest trick: coming off as streetwise even as it keeps its nose to the glass. Nothing is being spoofed here, exactly, but the archetypes are presented from the viewpoint of someone who doesn’t buy into them all right away. That someone is the bedridden little boy played by Fred Savage, visited by his grandfather (Peter Falk), who brought a book along in hopes of entertaining the convalescent. Here’s where I come in. To anyone who knows me, this might be a bit of a surprise, but as a child I had a lot in common with the Savage character. I was more interested in video games, superheroes and sports than in literature. The surrounding culture certainly argued for a dichotomy between what should interest me and what should interest a girl. The subversive goal of the grandfather, and the movie, was to break down that barrier. (And of course it’s a one-sided barrier; “girly” is a pejorative with no counterpart.) It would take years for me to be fully conscious of it, but The Princess Bride was trying to make me a more well-rounded person. 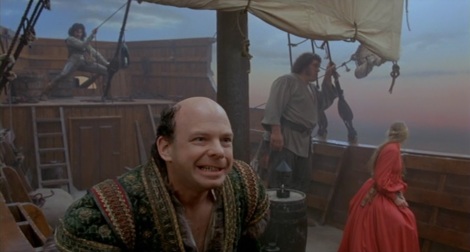 So the movie presents “As you wish” as a less mushy way of saying “I love you,” and from there it takes off at an impressive clip. The political intrigue, mysterious avengers, and strange beasts pile up on top of each other, but the sharply drawn characters give the film its focus, and naturally they are what stand out in the collective memory. The weirdness of the casting, because it comes together so well, is my favorite element. The late professional wrestler André the Giant would seemingly have had few opportunities to interact with playwright and intellectual Wallace Shawn outside of this movie. And yet the former’s Fezzik is arguably the most beloved character in The Princess Bride. He calls to mind Ed Wood’s use of Tor Johnson in his films, but without the concomitant desperation of that casting, because as it turns out he’s just right for the role, or at least no more outlandish than anyone else. Mandy Patinkin gives the most interesting performance in the film, his amusing accent granting new life to every bit of revenge-story boilerplate he utters. Inigo Montoya’s subplot, without overtaking the “true love” narrative, completes a satisfying arc on its own. Then there are the comedians who fill the movie’s supporting and cameo roles. They tend to hog the screen, but because the rest of the movie is a comedy, their contributions are welcome.

Ironically enough, my main criticism of this movie today comes from the more “feminine” angle. Cary Elwes and Robin Wright play Westley and Buttercup, the two lovers who epitomize the story’s thesis and drive the narrative from beginning to end. They are very important, but the supporting players have completely upstaged them in the popular consciousness. Elwes does get to crack wise, dress like Zorro, and do a number of heroic things, at least. But the title character is almost an afterthought. My main problem with Buttercup isn’t so much about her almost total passivity; such is “traditional,” after all. The real head-scratcher is that the movie makes her powerless and then proceeds to scold her for not resisting a prince who has total power over her. Even acknowledging that she thought Westley was dead and is being forced to marry a man she doesn’t love, Westley still accuses her of faithlessness. Then they tumble down a verdant English hill (with many an “ooph”) and all is forgiven. Their relationship is smooth sailing outside of this one scene, but perception matters. The nadir of my experience with this film was when I saw Buttercup’s guilt-trip nightmare used as a purity culture visual aid at the Christian high school I attended. That scene (surprise “It was just a dream” twist and all) still turns my stomach a little. 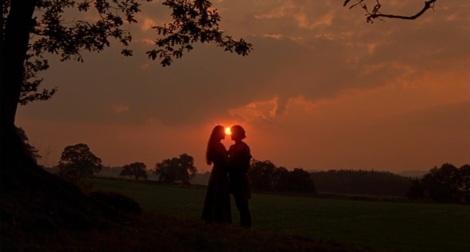 All that aside, though, The Princess Bride still works its magic. Screenwriter William Goldman’s strange world, adapted to the screen from his own novel, blends lush natural settings with throwback artificiality. Rock musician Mark Knopfler provides the distinctively dated but fun score, with synthesizers piping out adventure melodies and a chord to punctuate every sword blow and significant nod. Rob Reiner directs the material with a terrific sense of humor. The consistent wit of the dialogue and the ultimate sincerity of the execution are perfectly balanced. Many fantasy films made since have attempted to strike that balance, but few have succeeded quite so well. The Princess Bride is influential first because nostalgia for these old-fashioned stories is evergreen, and second because it provides a blueprint for the postmodern appropriation of those stories. Like the little boy, both the creators and the audience have to come around to believing in true love and miracles, or it just won’t work. As I said, I was that little boy, and I need to remind myself to keep believing.

One response to “My Favorite Movies: The Princess Bride”