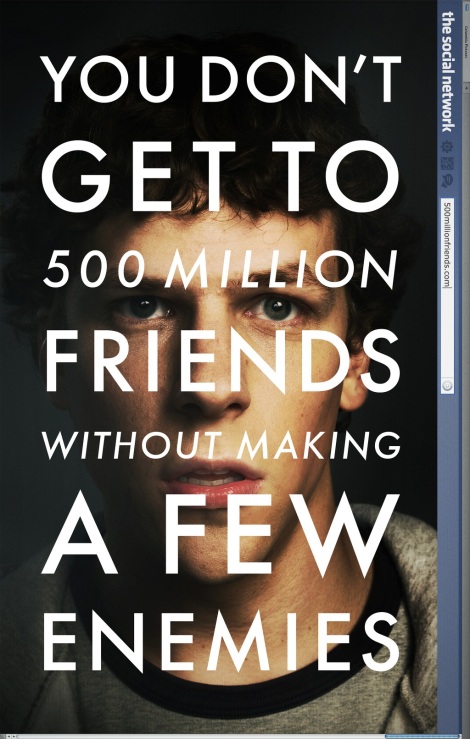 Five years ago, the consensus on The Social Network was that it wasn’t so much about Facebook specifically as it was an update on the age-old concepts of genius, entrepreneurship, and betrayal. Screenwriter Aaron Sorkin notably contended that a similar story could be told about the inventor of a “really good toaster.” (He recently recycled this line in an interview about his newest film, Steve Jobs.) For every critic who believed the film captured something about “the way we live now,” another mocked that kind of pretension. Maybe it was necessary for a few years to pass before the picture came into focus, but it’s possible this film is more relevant to discussions of internet culture now than it was in 2010.

The first, most obvious thing to note is that, even when it was released, The Social Network was historical fiction, recounting events from the previous decade. Original audiences knew Facebook as an empire and witnessed the story of its origins as a homegrown phenomenon. Now, the events in the film are more than a decade old, which in internet years makes them ancient. The idea that Facebook was once the hot new thing among college-age people seems quaint. (Older people who want to act like they’re still in college are another story.) Fashion, as the movie’s Mark Zuckerberg (played by Jesse Eisenberg) memorably puts it, is never finished. Young people never stay with a single trend for long. In that sense, it was wise for the filmmakers not to put too much effort into being up-to-the-minute. Today, it’s impossible not to notice all the notepads in the deposition scenes. In the film’s one classroom scene, an angry student passes a handwritten note back a few rows to Mark. Pen and paper, not even a text message. Mark responds by focusing his energies on the creation of Facebook, a more sophisticated way of leaving angry, hurtful comments. The rise of smartphones just a few years later would help complete our transition to the digital city.

The other common disclaimer about the film is that it’s a “fictionalized” version of true events. Certainly, there are characters in The Social Network who are entirely fabricated, although the basic facts about the two lawsuits brought against Zuckerberg are faithfully presented. But a character explicitly refers to the story as a “creation myth,” and mythmaking feels closer to the heart of it than fictionalizing. There is grand ambition at work here. At the time, The Social Network was frequently compared to Citizen Kane, which, admittedly, is a time-honored method of anointing a movie as the next Great American Film. The Zuckerberg character, in his public successes and private failures, actually has more in common with Jay Gatsby than he does with Charles Foster Kane. As Scott Foundas put it in Film Comment, Zuckerberg is “a self-made outsider marking his territory in the WASP jungle.” Like Gatsby, he pines for an unattainable woman. The film’s brilliant opening scene, with its clipped, plate-spinning dialogue, establishes everything about the plot as well as the tone — subterranean rage poking out in the form of affectless sarcasm. The scene does earn comparison to the Citizen Kane breakfast table sequence, succinctly painting a portrait of the death of a relationship.

So this film was looking back somewhere between seventy and ninety years for its inspiration. It’s sounding less and less like a movie about Facebook. Then again, the foundation for the characters is, simply, human nature, which hasn’t changed despite all our technological advances. This film delights in its ironies, the most pointed of which is that a character who “doesn’t have three friends to rub together to make a fourth” somehow masterminded the biggest forum for interpersonal communication in history. Mark alienates everyone with whom he spends significant amounts of time, including his closest friends. The parents of the world would appreciate the contention that social media has devalued and corrupted true flesh-and-blood relationships, but The Social Network isn’t quite so specious. Mark’s problem isn’t a lack of social development, but self-pity and jealousy toward the popular cliques. He’s part of nerd culture’s ascendancy, in other words, the fallout of which is still with us today.

The original purpose of Facebook, according to the film, was to allow this particular nerd to seize a new kind of power, to democratize the social hierarchy of college. In the “real” world, there were certain clubs that even a Harvard student, no matter how rich or smart he may have been, could never join. Facebook started out as just another club, but with Zuckerberg in charge. In a matter of years, the democratization process swept across society at large. Andy Warhol’s famous “fifteen minutes” comment has finally been fulfilled. Every offhand comment or candid image has the potential to spread into the popular consciousness. Sean Parker (Justin Timberlake)’s paranoia about the end of privacy seems more accurate all the time. In essence, what the movie points out about social media is how it amplified the neediness in all of us. We are all little Citizen Kanes now (“He wanted all the voters to love him, too”). This film attacks the internet for its voyeurism, its cruelty, and its lack of substance — “Cats that look like Hitler” remains a remarkably pithy summation of the whole venture. But in the end, there’s nothing new under the sun. These problems have always been with us.

The Social Network was one of the first movies I ever saw in a theater that captured my imagination for each individual ingredient in its recipe. Each filmmaking element stands out, but they work together rather than competing for attention. The film’s dual auteurs, Sorkin and director David Fincher, complement each other beautifully — Sorkin’s procedural acumen and gift for pleasurably intelligent dialogue melding with Fincher’s precise but ambivalent treatment of the subject of toxic misogyny. The editing by Kirk Baxter and Angus Wall jumps back and forth in time in a way that only increases suspense, each moment flowing from the last. Jeff Cronenweth’s camera captures the muted colors of this heartless world. The score by Trent Reznor and Atticus Ross connects the old emotional truths with their new digital venue. The performances are outstanding, as well. Eisenberg creates the decade’s definitive “love-to-hate” character. Rooney Mara, the two-scene wonder, makes Zuckerberg’s ex-girlfriend a plausible object of desire while at the same time making her the most sensitive and mature person in the movie’s world. Armie Hammer’s dual performance has often been celebrated, and rightly so. Timberlake is almost as magnetic as Eisenberg, but in a much more easy-going manner. Finally, Andrew Garfield carries the weight of the audience’s sympathy with ease, playing Mark’s best friend and surrogate conscience, a function that eventually becomes obsolete. All of these parts come together to form a spectacularly entertaining film. It’s a thrilling drama about intellectual property disputes and computer code. For that reason, it’s a small miracle. It’s also a screwball comedy in which women only make fleeting appearances. For that reason, it’s a tragedy.