My toys have been resting quietly in the family basement for several years now. It’s a good retirement, side-by-side with some of my older brother’s toys. I almost never think about them. This might sound more like a Toy Story 3 observation, while the original film blissfully shows toys in their prime with no fears of the distant future. The special connection I have with these films is partly due to how well they synchronized with my own life. I’ve always been just a few years older than Andy, the semi-divine owner of the sentient playthings Woody, Buzz Lightyear, and company. Toy Story 2 came around just a couple years before I stopped playing with action figures, but it didn’t occur to me how prescient that movie was until much later. Today, twenty years after sitting in the theater with my dad watching the first fully computer-animated feature film, I can approach Toy Story in two distinct ways at once. As an adult with a more refined taste, I concentrate on filmmaking techniques, by way of a consciousness of the “camera,” sound design, and performances that I didn’t have in 1995. Underneath this sophistication is a vivid palimpsest, the pure joy of character, humor, and story that I felt from the beginning. The child I once was has not gone forever. This movie has a way of bringing him out of me.

Technological leaps and bounds have reduced Toy Story‘s visual appeal somewhat, but not much. The simple, insistently clean style is perfectly suited to a plastic world. Pixar’s m.o., in this and most of the studio’s subsequent films, is realism. That’s quite a different (and some would say limiting) direction for animation to take, considering the medium’s potential for making impossible things real. Setting aside the main conceit, this film is dedicated to recreating the real world in all its dimensions — the interior of a mid-90s station wagon, rain streaks on windows, wooden floors, houseplants, Christmas lights. Even the toys have a physical integrity, from loose-limbed Woody to the army men walking with planks glued to their feet. If an Etch-a-Sketch could walk, that’s what it would look like. (Who thinks of that? These guys.) This attention to detail allows animation to approach the better-respected status of live action. The three-dimensional quality of computer animation further blurs the distinction.

Most interesting from a visual standpoint, though, is the camera techniques that behave as though a camera were physically present in this world. The point-of-view shots racing up stairs to a character’s room (first Andy’s, then Sid’s) don’t necessarily call attention to themselves — and even Pinocchio opened with a “bouncing” POV shot for Jiminy Cricket — but they feel highly realistic. When Buzz tries out his wings and falls, severing his left arm, his parts take on a circular shape, and the camera complements this by rotating clockwise as it tracks upwards. But the moment that most clearly imitates live action involves a jump cut. When a jump cut separates a character walking through a door and then walking back out (sometimes in different clothing), time is collapsed, of course, but in a winking manner. Attentive viewers will always notice the subtle shifts in lighting between shots, catching the drift without ever being fooled. In animation, the quirks of lighting needn’t apply. But between the shot of Andy entering his closet in cowboy garb and the one where he leaves it in a cardboard spaceman getup, the shadows cast by the crib in the room change. Those shadows were created so that it would feel like a real boy was entering a real closet and the necessary costume change was elided by movie trickery. Those shadows are the entire Pixar endeavor in miniature — photorealism in the service of whimsy.

My grown-up and childlike viewpoints collide at Pizza Planet. Toy Story was a product of the postmodern era, when movies started building themselves from references to other movies. The sequel would expand on the meta references to westerns and science fiction, but it all started here. Interestingly, although Woody is the protagonist, the filmmakers are clearly more excited by things like Star Wars and Star Trek than they are by oaters. There’s the opening bank robbery and Sergio Leone-inflected introduction of our hero, but after that it becomes Buzz’s world. Pizza Planet was almost made for him, with its galactic iconography and colorful gadgets. Nothing about the place tickles me more than the reference to Ridley Scott’s Alien, naturally. When I was eight years old, though, that reference completely escaped me. To my younger eyes, Pizza Planet was just a variation on my favorite place in the whole world during the early to mid-90s, Chuck E. Cheese’s. I also missed the tone of derision this movie takes toward video games, but no matter. Andy was just like me. He lived the life to which I aspired. 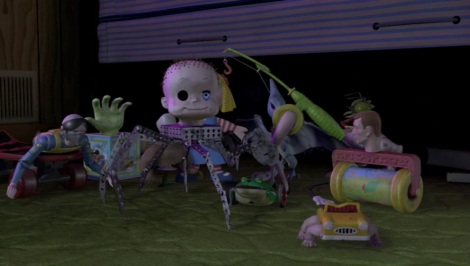 Ultimately, what carries me through this film is the same today as before. This is a brilliantly written movie, with a satisfying narrative that moves briskly. The opening sequence gets in some great jokes and establishes Woody and Andy’s relationship in just a few breaths. It’s remarkable that Toy Story never feels rushed or hyperkinetic. The Lego Movie is twenty minutes longer, but it sometimes feels like four or five movies squeezed into one. This movie is much simpler, focusing on two central characters and only employing four locations (Andy’s house, Sid’s house, the gas station, and Pizza Planet). The rhythms and wit of the dialogue — written by Joss Whedon, Andrew Stanton, Joel Cohen, and Alec Sokolow — have lost none of their spark to over-familiarity. In addition to the priceless work of Tom Hanks and Tim Allen in the lead roles, the supporting cast is filled with wonderful comedic talents. Sid Phillips might still be Pixar’s greatest villain, a sinister but dorky figure who is only scary from the toys’ perspective (although his love of blowing things up might be something to look into). The film’s sympathy for the mute freaks of Sid’s toy collection is another fabulous touch.

Perhaps this movie has rightly been eclipsed by later masterpieces, including its own sequels. Pixar’s subsequent films are definitely more ambitious, and I do love most of them. But I keep coming back to this one, and not merely because it was such a central event in my childhood. For all their inventiveness, Pixar movies keep circling back to the basic ideas probed here. Characters get lost and try to find their way home; fanciful occupations are explored as mundane routines; someone you once found irritating becomes your friend. Sometimes the simplest expression of these ideas is the best. I would go so far as to argue that “Take care of Andy for me” is significantly more poignant than “Take her to the moon for me” without even trying to be. Like the greatest of all animated films, Pinocchio, Toy Story fulfilled the etymological sense of the term “animation,” and it did so with the kind of care and technique that can survive even when the novelty has corroded like plastic.