Can it be that I’m getting less cynical about the Academy Awards? Looking over last year’s post, I find that I was a little grumpy for some reason. Maybe it was the fact that I got up to watch the announcement live for the first time and wasn’t feeling 100%. In any case, I was more prepared for the mixed bag this year, and as always, I haven’t seen many of the films that the critics I follow are currently debating about. The question of representation remains pertinent, but I’m grateful for the interesting choices that punched through.

Of the three films with the most nominations, The Revenant is the only one I haven’t seen. Along with Mad Max: Fury Road and The Martian, it shows that the Academy is willing to reward excitement along with prestige, even if that excitement exists in a limited range. The consensus Snub of the Year is Carol, nominated six times but left off for Best Picture and Best Director. Star Wars: The Force Awakens performed well, with five nominations. I’m always playing Stretch Armstrong, hoping to see true excellence rewarded on the one hand, while rooting for popular films so my family will raise a few eyebrows on the other. Everyone must be made happy! So it goes. 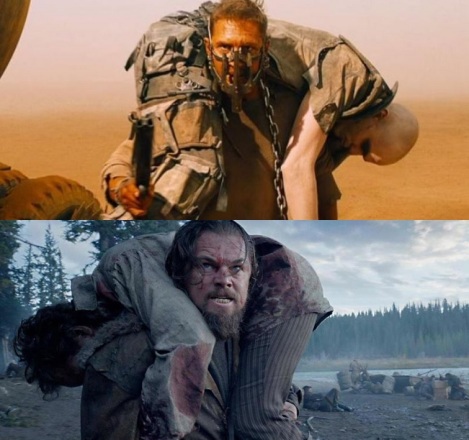 Eight picks, just like last year, leaving plenty of room to lament whichever films belong in the two vacant spots. Still, this seems like a solid group. I’ve seen three of them (hey, that’s better than the two I got around to at this time last year and the year before!), but the others at least seem like movies that are trying something, not settling for the kind of calculated solemnity and political statements that define “Oscar bait.” The one that probably comes closest to that is Spotlight, so of course it’s the front-runner. As to the film we should all root for, the choice has rarely been easier. The exceptional showing of Mad Max this morning indicates that it has a strong chance. Will I catch up with any of the five movies I missed before February 28? Room was already on my shortlist, but it won’t be available on demand until March, so who knows.

Jennifer Lawrence continues to be the Academy’s favorite young actress, collecting her fourth nomination this decade. She competes with her peers Larson and Ronan, while the critics cheer for their elders, Blanchett and Rampling. I haven’t seen any of these movies yet, but I like all of these performers.

This category undoubtedly contains the strongest showing of Oscar bait, with prestige biopics and social cause films that picked up only a couple nominations at best. Some of these movies have been booed right out of the gate. The competition is pretty flaccid, as well. The award is clearly DiCaprio’s to lose, meaning his reputation as the lovable loser may finally come to an end. Damon was quite good in The Martian, but I don’t think he’ll come within a mile of winning.

The distinction between leading and supporting roles has always been fluid, depending on the strengths of the respective fields as much as screen time, if not more so. Mara, allegedly, has a little more screen time in Carol than Blanchett does, so the maneuver is especially galling this year. I don’t see any reason to take that kind of thing too seriously, though. This is a pretty strong group, and I’m not sure who will win. Leigh was pretty memorable in The Hateful Eight.

Age and respectability dominate this group. It will probably come down to Rylance vs. Stallone, which is an odd matchup if ever I’ve seen one. Bridge of Spies is the only film on this list that I’ve seen, but Rylance does wonderfully empathetic work and I’m rooting for him over the “lifetime achievement” nod for Stallone. 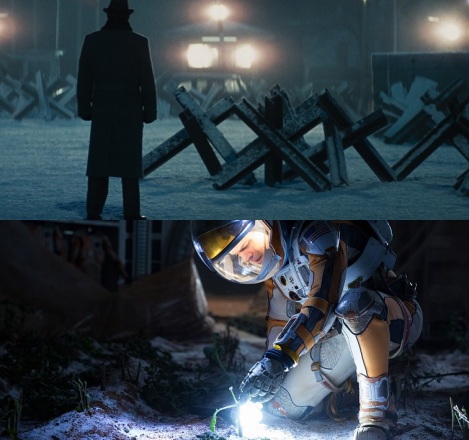 A seventy-year-old man directed the best action movie of the decade. If this award goes to Miller, it will be spectacular. The other nominees are upstarts who knocked off some truly great directors this year — with the exception of González Iñárritu, who’s hit a home run two years in a row. I’d like to see this category and Best Picture go off in different directions this year, but it’s hard to tell.

For the critics I follow, this group seems to be the most celebrated — arguably the strongest field in this category in years. The variety of styles and subjects is impressive, helping to dispel the idea of animation as a “genre.” The final Studio Ghibli film, one of my favorites from that illustrious animation house, was anything but a sure thing. Pixar is likely to end up on top once again, which I wouldn’t mind at all. Meanwhile, Anomalisa is the film I’m most excited to catch up with from last year. I had never heard of Boy and the World before, but that’s not unusual for this category. Here we have my favorite selection (When Marnie Was There) and my favorite omission (Minions had been suggest at least a couple times) of the year.

There are some true giants in the Best Original Score field, John Williams and Ennio Morricone foremost among them. I am definitely going to make time (seventeen minutes, to be exact) for World of Tomorrow now that it secured a nomination. Inside Out was nominated for its screenplay but didn’t break into Best Picture; with each passing year, Up and Toy Story 3 look more exceptional for getting into that discussion. Son of Saul (foreign language) and The Look of Silence (documentary feature) are sober and stylistically interesting front-runners in their respective categories. Mad Max and The Revenant will be facing off nine times, including, somehow, for Costume Design. I think everyone has forgotten that Avengers: Age of Ultron exists by this point. Mad Max (rightfully) wiped out every other blockbuster this year with the inevitable exception of Star Wars. Those two movies are Hollywood in microcosm, banking on ancient franchises to rescue a struggling industry and sometimes getting breathtaking results.