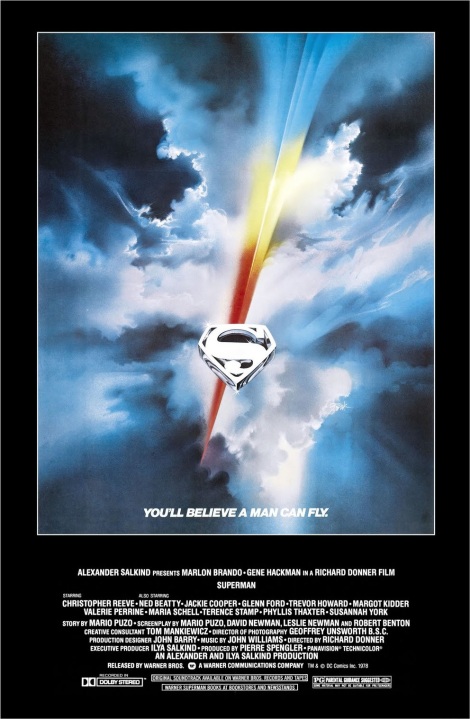 The film’s marketing tagline — “You’ll believe a man can fly” — and first four words of dialogue — “This is no fantasy” — make the interpretive approach to 1978’s Superman painfully simple. Comic-book superheroes had previously been the province of movie serials in the 1940s and later television. Hollywood didn’t feel the need to provide a grander stage for what was considered children’s entertainment, because to do so would demand the kind of budget that would force studios to seek a broader audience. Thus, when a big-budget Superman film was finally attempted, the message to audiences was that everything would feel real. Not only would the Man of Steel himself be a fully credible presence, but the special effects would be state of the art and seamless, and the talent behind and in front of the camera would be of such a caliber as to legitimize the whole endeavor.

The most important ingredient, of course, was the title character. A notoriously difficult role to cast, Superman presents the additional challenge of being something of an actor himself. Any performer asked to don the cape would not only need the physical qualities of a male specimen etched in marble, but the ability to distract from those attributes by pretending to be a naïve, nebbishy hick. The big hurdle right out of the gate for making Superman believable is this: how can a pair of glasses be anywhere near enough to hide Clark Kent’s identity? Maybe there isn’t a fully satisfying answer to that question, but in Christopher Reeve, at that time an unknown actor, we have essentially the Platonic ideal for the role. The vocal and gestural distinctions he came up with for the two personas are pitch-perfect. Superman’s fundamental decency is fully realized without a single wink, while Kent the klutzy milquetoast is winking the whole way. It isn’t a schizophrenic performance, either. Reeve understood how both personalities were informed by the character’s corn-fed optimism and inexperience with the big, bad city. The conviction in his work is inspiring and fits the material to perfection.

With the tights filled, the next challenge was getting Reeve off the ground. After nearly forty years, the special effects in Superman still hold up pretty well within their obvious limitations. The wire work is invisible, the matte paintings skillfully created. When Kent, as a small boy, lifts the back end of a truck off the ground, it’s a simple but effective magic trick. Later, there’s a great unbroken shot that, with the aid of rear projection, allows Superman to fly off Lois Lane’s balcony before emerging at her front door as Kent. It’s all executed with the kind of sophistication that hadn’t been seen before and still hasn’t faded. Superman’s powers are revealed gradually and in a variety of ways. When it comes to the most efficient and cogent way of expressing his gifts, the scene in which he catches Lane as she falls out of a helicopter and then catches the helicopter in his other hand might never be topped. This isn’t to say there weren’t any logistical problems that the filmmakers ultimately “solved” by throwing their hands in the air — the costume changes, for example. The time-travel of the ending is preposterous and thematically incoherent. Generally speaking, though, the film leaps its technical challenges in a single bound.

More intriguing than the special effects problem was the problem of bringing “Truth, Justice, and the American Way” into the disillusioned 1970s. While Star Wars the previous year had gone a long way not only toward making big-budget science fiction phenomenally profitable but Oscar-worthy, the team behind Superman was made up of some heavy hitters whose presence was intended to sell the project to a skeptical world. The script was written by Bonnie and Clyde scribes Robert Benton and David Newman (along with the latter’s wife, Leslie) as well as Mario Puzo of The Godfather fame. Thus Superman was dropped into a world of violent crime and antiheroes, and as the song goes, if he made it there, he could make it anywhere. The script acknowledges that the old-fashioned idealism of the character is a rough fit in a Vietnam- and Watergate-scarred society. Admittedly, these ideas aren’t really developed, as Superman goes up against, not Michael Corleone, but a distinctly over-the-top megalomaniac.

The film’s grasp for prestige is evident long before the screenwriting credits. In fact, it comes before the title. Christopher Reeve isn’t mentioned until after the title (followed immediately by Ned Beatty, in case you needed more proof that this was 1978). The top-billed stars were Marlon Brando and Gene Hackman, highly respected actors who had each won an Academy Award in successive years earlier in the decade. It could be argued that neither actor shows much respect for the material. (Alec Guinness didn’t think much of Star Wars, either.) The sadness of Brando, as Jor-El, saying goodbye to his infant son before their home planet explodes, could reasonably be confused for embarrassment at the names he’s been asked to pronounce. Hackman, on the other hand, goes for all the gusto he can find. I’ve never agreed with the argument that his hamminess derails the film. Either you find it funny or you don’t, but in either case, his outlandish ego is the only thing that could share a stage with Superman. Lex Luthor and his associates Miss Teschmacher and Otis are delusional clowns, but delusional clowns have been known to find their way into positions of power.

Superman ends up being an unsteady film, with lumpy pacing and some tonal inconsistencies. The competing requirements of bringing the world of Superman to life don’t congeal perfectly. As a newspaper comedy, the film is rather poor, and the script takes a condescending attitude toward Lois Lane. Nevertheless, this film gives its subject the kind of grand scope that no other superhero film has matched. Cinematographer Geoffrey Unsworth’s images have a magisterial beauty. Richard Donner directs the actors very well, both those already named and also Margot Kidder, Jackie Cooper, Marc McClure, and Valerie Perrine. Best of all (and it’s almost a crime that I haven’t mentioned his name yet) is the music of John Williams: the full-throated celebratory anthem for the hero, the stately fanfare for Krypton, the syrupy love theme, Otis’s tuba. Williams, like Reeve, finds a way to bring the goofiness and the seriousness together. That balance is the reason this version of Superman has been considered definitive for so long. He’s a hopeful symbol of purity in a world that needs saving.