This movie is now eighty-five years old, and it hasn’t lost a step. While the circumstances of its time are significant and complicated, its story and style are evergreen. Its director, Fritz Lang, went to Hollywood a few years after completing it, ensuring that his influence would be felt in American cinema for decades to come. Police procedurals and serial killer stories alike continue to crib from this film. Particular echoes can be found in such far-flung places as The Third Man and A Nightmare on Elm Street. Arguments expressed by characters on the subjects of capital punishment and the insanity plea are perennially familiar. Here is a film, only a few years after the introduction of sound, that incorporates sound into its storytelling in radical ways, without ever losing the dynamic power of imagery. As poetic and disturbing as it ever was, M stands for Modern. 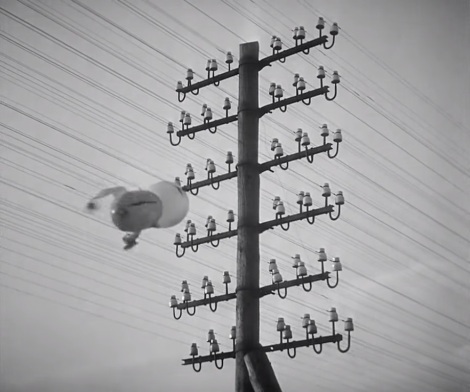 Probably the most famous component of M‘s greatness is its soundtrack. This was Lang’s first “talkie,” making him one of the last great directors to make the transition. He had evidently used the time to think about what kind of tool this new technology could be. The stereotype of the first few years of sound is that filmmaking was weighted down by cumbersome equipment, trading the expressive grace of silent film for cheap gimmicks. Leaving aside for now the visual ingenuity of the film, sound plays a central role in the story. The child murderer Hans Beckert (played by Peter Lorre) is exposed on two occasions by the sounds he makes. First, on the streets of Berlin, he compulsively whistles Edvard Grieg’s “In the Hall of the Mountain King” while stalking his prey. (To drive the point home further, it’s a blind man who makes the connection.) Second, while hiding in an office building, he gets locked into a room, unwittingly, by a night watchman. The tapping sound Beckert makes as he tries to escape reveals his location. What Lang realized was that sound doesn’t have to be tied to the images on the screen. A famous early scene has a victim’s mother calling her name. As she speaks, the film cuts to a shot of an empty room, and then an empty place at a table. The words and images combine for a new meaning.

On my latest viewing, perhaps even more striking than the sounds in M were the silences, because they’re so counter-intuitive for an early talkie. After the whistling announces Beckert’s presence, much of the time Lorre actually spends on camera is cloaked in uncomfortable silence, with either his breathing on the soundtrack or nothing at all. The chase sequence about an hour into the film is notable in this regard. Fritz Lang was one of the major artists of German Expressionism, a movement that paved the way for film noir, and this scene calls to mind Double Indemnity‘s Walter Neff talking about not being able to hear his own footsteps. It’s an otherworldly dread as Beckert finds himself, quite unexpectedly, surrounded.

Along with the moments of eerie quiet, the film occasionally employs a visual strategy of emphasizing empty spaces. For the most part, M is thrumming with activity, with throngs of police officers, criminals, and ordinary citizens all reacting en masse to the monster in their midst. But sometimes the mise-en-scène becomes gutted and barren. The aforementioned sequence with Elsie Beckmann’s mother is the first, culminating in the staggering image of the little girl’s balloon fluttering among the power lines. Later, shots of various parts of the office building are cleverly used to illustrate a police report of that night’s events. Finally, a series of desolate images of an abandoned building set the stage for the kangaroo court scene, at which the criminal fraternity decides Beckert’s fate. These absences convey a mournful, even hopeless tone. They last only a few moments, but they’re spread out over the entire film.

Those external location shots also hint at the ways the movie is able to breathe. Far from being hemmed in by sound recording equipment, the film contains a number of ambitious tracking shots, some linked to each other by subtle cuts. These take in the pertinent details of different social groups. As I’ve indicated already, the two most important groups are the criminal underworld and the police department. The script, by Lang and his personal and professional partner Thea von Harbou, wryly equates the criminals and the police in their independent efforts against a common enemy. The mob wants Beckert stopped because his murder spree is making the police more vigilant, which puts a damper on less violent criminal activity. Even murderers and thieves are sickened by the child killer. The film cuts back and forth as the cops use forensic science and mental health records to find their man, while the criminals set up a network of beggars throughout the city to try and catch him in the act. Ultimately, their efforts combine to bring him to justice.

The courtroom scene is another enduring piece of film history, here more on the level of dialogue and performance than any other technique. Peter Lorre had managed to put across his character’s tortured nature even before his big speech at the end, but his words deepen the characterization. He mocks his accusers, not only for their hypocrisy, but because for them crime is simply a job, a way of paying the rent. For him, it’s a compulsion, a shrieking urge from deep inside him. He is as afraid of himself as anyone else is. The underlying argument is that he wasn’t in his right mind when he killed the children; the prosecution isn’t persuaded, and rightfully so. But the scene pulls off the impossible by inspiring even a little pity for this man.

Just as impressive as the influence and brilliance of this film is the way in which it personifies the maelstrom that was Germany in the early 1930s. Whether it was intended as a Nazi allegory has been subject to debate. The Party was suspicious of the film before it was released, but by 1940 Beckert’s confession was incorporated into a Nazi propaganda film as an illustration of implacable Jewish evil. (Lorre was Jewish.) It can be said that the finished film meshes the perspectives of Lang and Harbou — whose collaboration ended soon after this when he fled the country and she joined the Nazis — so that it never becomes propaganda for either side. Everyone in the film is culpable. No one is clean. Something horrific was brewing in the country, and M‘s closing admonition for parents to look after their children would soon take on unthinkable new meanings. The genre pyrotechnics of this film ring true with the cultural crises of the day, and they continue to reverberate down the corridors of time.