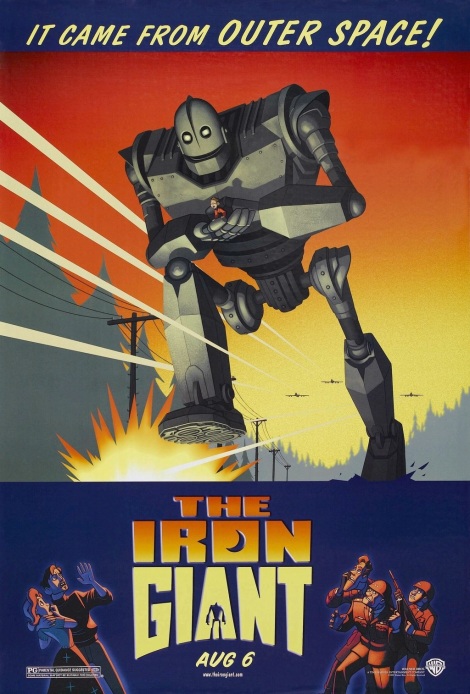 I hadn’t seen this one in something like five years; the plan was to put off writing about it for this blog until the Blu-ray release, which only happened this month. Soon after experiencing The Iron Giant on Blu-ray (which I highly recommend: it looks, and especially sounds, great, making for the loudest home viewing experience I’ve had in a while), I was reminded of something that should have been obvious. This movie is completely hilarious. In fact, it’s one of the most important comedies I’ve ever seen vis-à-vis the development of my own sense of humor. Looking back at my list of funniest movie scenes from two years ago, there’s no Iron Giant, which is a terrible oversight. The list is basically null and void. It’s interesting, though, that a movie, which has been in my all-time top ten for a decade now, could just slip my mind like that. The ending has to have something to do with it: an ending so powerful that it colors the whole film as a highly emotional experience. But it really isn’t until the last fifteen minutes of an eighty-six minute film that things get solemn. Up until then, The Iron Giant is just an all-time classic of animated comedy. This shouldn’t be a surprise, considering who made it.

I didn’t realize until fairly recently that Brad Bird was one of the guiding lights behind The Simpsons. He served as “Executive Consultant” for the first eight seasons of the show, so his fingerprints are much lighter than they would have been if he’d written the scripts. But there’s a brusque quality to the jokes in The Iron Giant, an attention to the influence of media, and an affection for the odd assortment of characters who make up a small town, that combine to give the film a familiar ethos. Hogarth Hughes, the boy hero of the film, has his most Bart Simpson-like moment when he sprinkles a laxative onto a milkshake to evade a government operative. He’s perhaps at his most Lisa-like during his espresso-fueled monologue (“I don’t think I’m smarter, I just do the stupid homework”).

The scene that probably would have made my top 25 list if I hadn’t been a fool is the one with the squirrel. This scene comes less than five minutes into the movie and introduces three of the main characters: Hogarth, his mother, and Dean, the beatnik proprietor of a scrap yard. Hogarth, an overly ambitious animal tamer, brings a squirrel in a box into the diner where his mother works, hoping she’ll let him keep it. Before he’s even finished his pitch, the rodent has scurried away and settled under the booth where Dean sits. The precariousness of the situation shows why Brad Bird was such a natural choice to direct Pixar’s Ratatouille eight years later. What makes this scene great isn’t the inevitable chaos, elegantly captured as it is, but the way it’s silently built up, mostly offscreen. The squirrel is briefly forgotten as Hogarth and Dean overhear an old fisherman talking about a strange object that fell from the sky during a storm. Hogarth picks up on the Sputnik-fueled anxiety. A brief shot of the squirrel examining the cuff of Dean’s jeans is more than sufficient to explain what happens next. The specifics shouldn’t be spoiled, but the humor is all in the complex physical reaction of Dean, including Harry Connick Jr.’s voice performance. It’s intricate and immeasurably satisfying.

The Iron Giant is never shy about reminding its audience that it’s a period piece, right from the opening shot of the aforementioned Russian satellite in orbit. A couple other very funny moments involve visual media that place the film at a specific time. Hogarth stays up late watching some low-rent sci-fi horror on the family’s black-and-white television one night. Then at school, his class watches an instructional film about the procedures for a nuclear attack. This latter scene contains the most Simpsons-esque humor in the whole film (“suddenly, without warning, ATOMIC HOLOCAUST!”). Both scenes share a great affinity for the films of Joe Dante. Dante’s film Matinee, in particular, springs to mind, a movie that has its fun with Cold War paranoia before culminating in a frank acceptance that the apocalyptic danger of the time was real. The Iron Giant is commonly compared to Steven Spielberg’s E.T., and it’s true that the relationship between Hogarth and the giant is a lot like the relationship between Elliott and the alien. But it seems to me that Dante, who’s spent much of his career exploring the inverse of Spielberg’s small-town values, can claim at least as much influence on Bird’s vision as Spielberg. It could even be said that The Iron Giant takes the best parts of E.T. and Gremlins and combines them into something even better than either of those films. In fact, I’m saying it, but I’m not sure if anyone else would.

From start to finish, The Iron Giant is a complex collection of references leading, unexpectedly and thrillingly, to a meditation on the heroism of Superman. The politics of the film are not beyond criticism, straddling the fine line between “childlike” and “childish.” But the central point is that the giant is a person who’s been given awesome destructive power and can either wipe out humanity or protect it. After briefly transforming into a terrifying death machine straight out of War of the Worlds, the giant finally chooses to be Superman instead. It’s an act of love in a frightened world. This movie came out just before the superhero phenomenon started to pick up steam in Hollywood (Brad Bird later directed The Incredibles, as well), and it’s been heartening over the last few years to see references to The Iron Giant, however inadvertent. This has happened at least twice in the Marvel Cinematic Universe. The character in question is even named Iron Man. Tony Stark’s final act in The Avengers is very similar to the giant’s, and in Iron Man 3, the hero crashes outside a small town and befriends a young boy who helps him out. Sadly, Zack Snyder’s Superman does not have much in common with the giant, but there’s no need to get into that right now.

Coming right in between the Disney Renaissance and Pixar’s most fruitful period, The Iron Giant is often overshadowed despite bridging those two eras with an ingenious blend of hand-drawn and computer animation. The character animation is varied and amusing, owing as little to the Disney style as possible (Hogarth’s mother has the biggest eyes, but then, most Disney characters don’t even have mothers). The detailed work on the giant himself is fantastic, making him adorable without ever losing sight of his enormity and power, and the CGI is appropriately “alien” in this context. The Iron Giant also represents one of the few times that celebrity voice casting has really paid off. Connick, Jennifer Aniston, and Christopher McDonald are all terrific despite having little-to-no experience with voice acting at the time. Best of all is a pre-Fast and the Furious Vin Diesel as the giant, who puts his native gravelly timbre to the best use it’s ever had. Laying out all the ingredients that were put into this film side-by-side, it looks very strange. (The source material was a novel by English poet laureate Ted Hughes, and Pete Townshend has an “Executive Producer” credit.) But Bird and company were able to mix them into an engaging, irreverent, and loving piece of genre cinema. There won’t ever be another film quite like it.