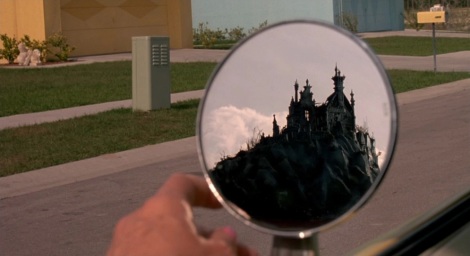 It’s very tempting to approach Edward Scissorhands as an autobiographical piece of work, the inimitable vision of Tim Burton. As a child, I first began to recognize the authorship of a movie director because of Burton’s early films — particularly an approach to Batman that couldn’t have come from anyone else. And certainly in the context of Burton’s career, Edward Scissorhands is prototypical, the movie he’s essentially been remaking ever since. But upon revisiting the film this week, I was struck by the harmony of all facets of filmmaking on display. Creepy oddball that he is, Burton found a talented group of people who were on his same wavelength. First among these is the movie’s screenwriter and associate producer, Caroline Thompson. Interviewed by the Los Angeles Times for the movie’s twenty-fifth anniversary, Thompson said that “it was one of those rare experiences where everybody was really making the same movie. We all had the same tone and same idea of what we were after. From production designer Bo Welch’s sets to Colleen Atwood’s costumes to Danny Elfman’s music… I didn’t realize what a dream come true it was.”

Thompson will never have anything like the recognition that Burton can boast, but she has been very important to his career, writing the scripts for The Nightmare Before Christmas and Corpse Bride as well. Their serendipitous meeting happened in the mid-eighties, when both were struggling to express their passion for dark fairy tales, especially the Frankenstein story. Burton told her about a drawing he had made in high school of a man with scissors for hands, and she immediately connected with the heart of the idea. Her treatment for the story soon followed. Thompson told The New Yorker in 1994 about her fruitful collaboration with the taciturn Burton: they finished each other’s sentences. In interviews, Thompson also likes to mention one piece of directing she was able to do on the set. Johnny Depp was having some trouble interpreting the title character, so the writer pointed out that Edward was partially based on her dog. Apparently, that hint was good enough to clear the roadblock. 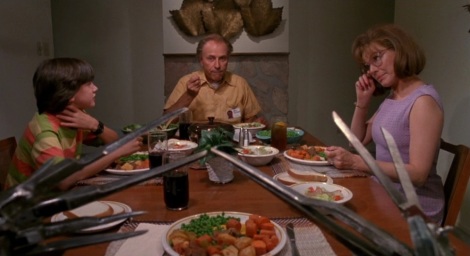 Pointing out that a script written by a woman includes an impressive variety of female characters is pretty facile, but on the other hand there’s no sense in waving away some of the crude stereotypes because a woman was responsible for them. Edward Scissorhands is absolutely a fairy tale, with characters filling prescribed roles. The framing device contends that the whole story is an explanation for the origins of snow, so there’s a bit of leeway with regards to realism. What stands out about the women is the vividness and distinctness with which they are written and performed. Dianne Wiest’s Peg is a pleasant entry point for the film who becomes a warm, if often hapless, surrogate mother for Edward. Her daughter Kim (Winona Ryder) conveys the broadest range of responses to the strange young man: fear, disgust, embarrassment, apathy, pity, remorse, respect, affection, and finally the most complete understanding of anyone in the movie. The other women of the neighborhood are less impressive, but even among them we find Joyce (Kathy Baker) and Esmeralda (O-Lan Jones) who take pronounced approaches to Edward, one physical, the other spiritual. The nymphomaniac and the fundamentalist are extremely tired tropes, but these actresses are delightful anyway, helping a great deal to sell the idea that Edward isn’t the only weirdo in town.

After the main character, the town itself is the most memorable element of the film. Based in large part on Burton’s and Thompson’s experiences in Burbank, California, the unnamed suburban neighborhood is quite a sight: aggressive pastel facades, uniformly perfect lawns, abandoned nightmare castle on the end of the street. The exterior shots were actually filmed on location in Florida, but production designer Bo Welch and art director Tom Duffield, with permission from the homeowners, made some alterations (painting included). Along with Colleen Atwood’s colorful costumes, the look of the place says a lot about the fake bonhomie and stunted imaginations found there. The film, taking an outsider’s perspective, has a great deal of fun skewing our perceptions of such things as waterbeds, aquariums, Christmas decorations, and, of course, shrubs. Edward is dropped into this world from another era, a tremendously different sensibility.

The last two names that bear mentioning are the most important to Burton’s career by far. Danny Elfman has composed music for all but three of Burton’s films. Their whimsical and puckish worldviews have been a natural pair for more than thirty years now. Elfman’s usual impish circus tunes may be a better fit in other films, but the romantic theme to which the score resolves is as lovely as anything he’s ever written. Then there’s the most visible collaborator of all. In assembling the team for this movie, Burton kept finding people who shared his fundamental understanding of Edward as a gawky misfit who wants to belong but can’t. Young heartthrob Johnny Depp, at least at a cursory glance, should have been the opposite of that. But there was something inside the actor that bristled at his possible future as a handsome leading man. He much preferred the challenge of burying himself in a role, essaying some of the more peculiar frontiers of human experience. Wrapping himself in Atwood’s harsh costume and pulling on Stan Winston’s ungainly scissor gloves, Depp created his first (and still best) flamboyant outsider.

Of course, Burton remains the force who tied all these elements together. Edward Scissorhands functions as an anti-Disney fairy tale (in some ways even a preemptive strike against the following year’s Beauty and the Beast), and Burton’s rebellion against the Mouse House’s superficial uplift is delicious to contemplate. The center of attention is always that empathetic Frankenstein figure, that poignant metaphor for adolescent discomfort and loneliness. This is a young man’s movie, and it came about at the perfect time, when Burton’s youthful ambition to make a statement meshed with the available technology (awkward physical effects are perfect for this material), and when Vincent Price was still alive to bless the proceedings with the approval of creature features past. Still, without the whole team, there wouldn’t be a movie, and it’s no coincidence that, twenty-seven years later, Burton hasn’t been able to put all the pieces together for a while. But for at least this one time (and a few others before and since), they all made the same movie.