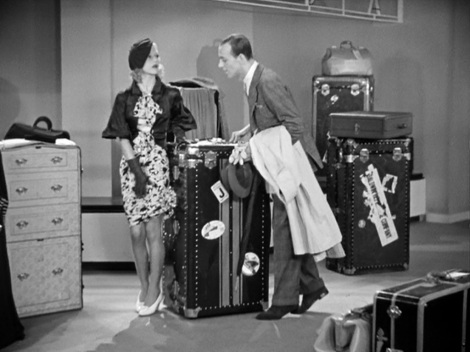 I had failed to see any of the Astaire-Rogers musicals until early 2014, at which time I was bulking up my working knowledge of 1930s cinema in general. This was a bad oversight, but I’m relieved to have it in the rearview now. Because I was working backwards chronologically, I had already seen Swing Time and Top Hat when I finally got to their first film as co-stars (they had appeared in supporting roles, and danced together, in 1933’s Flying Down to Rio), The Gay Divorcee. I loved Swing Time and Top Hat, the acknowledged masterpieces of their collaboration, so I approached The Gay Divorcee with a somewhat jaded eye. It met my expectations fully — slightly less great, but still highly amusing. I’m not sure exactly what prompted my original star rating, beyond a general readiness to stop watching this kind of thing for a little while. So, this blog series comes in handy yet again: whence my guarded approval?

The story, adapted from a Broadway play that also starred Fred Astaire, is not especially good — filled with blithe coincidence and taking its sweet time getting to the point. But all these movies needed was the two leads and whatever flimsy excuse to get their characters romantically involved. Having a few talented character actors to add humor was just a bonus. In fact, there’s a certain charm to the way things work themselves out for the characters in this film, a romantic comedy hopefulness that fermented most effectively during the Depression. Still, there’s a lot of zigzagging toward what ends up being a very simple conclusion.

Ginger Rogers plays the prospective divorcee of the title, though the movie is more about Astaire’s pursuit of her than her desire to be rid of her husband, whom we don’t even see until the very end. The two main characters, named Guy and Mimi, follow the expected rom-com progression from discord to harmony. Mimi is skeptical of the lanky masher’s advances, but he persists. Finally, fifty-three minutes and forty-five seconds into the film, he gets her to dance with him. Perhaps in 1934, this bit of delayed gratification didn’t carry quite as much weight, but with hindsight, the sense of release is incredible. Even if Astaire’s character weren’t also a dancer, this would really be the best and only way for him to get her attention. When their bodies start moving together in rhythm, their instinctual, ineffable response to Cole Porter’s “Night and Day” feels gloriously right. The dancing itself would get more impressive in later films, but the context alone makes this moment special. Rogers’ reaction when it’s over is priceless (and also suggestive in a way that was only possible in 1934, when the Production Code was new, its boundaries still being felt out — “Cigarette?”). This guy isn’t just a lovesick dope/stalker after all. They flow together like water, and it’s a joy to watch. 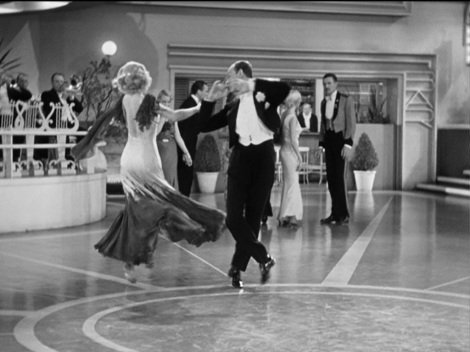 So it might be a bit surprising to learn that this joy is replicated only once more in the film, for the song “The Continental.” This twenty-minute sequence includes not only Astaire and Rogers but a whole troupe of color-coordinated dancers. I have squirmed at its length both times I’ve seen this film, but it definitely has its moments. Rogers is absent for the other three songs in the film, one of which, “Let’s K-nock K-nees,” has Edward Everett Horton dancing with a teenage Betty Grable in one of the more peculiar bits of movie trivia from this era. It behooves me to look askance at the decision to remove all of the original Cole Porter songs save one, since the new songs don’t do much for the story (with the exception of “Needle in a Haystack,” which is perfectly apropos for its scene). This is just to say that the padding is visible; it’s a question of how enjoyable the viewer finds that padding.

There are three important supporting characters, each of them goofy. Guy’s friend Egbert (Horton), is also Mimi’s lawyer, though the three of them are never all together at once in order to identify each other until near the end. In addition to offering a not-quite-sympathetic ear to Guy’s pining, Egbert arranges a staged love scene with a paid actor so that Mimi can get her unseen husband to divorce her. But Egbert is a little on the incompetent side, and also flustered by Mimi’s aunt, Hortense (Alice Brady), a brassy woman to whom he had once been affianced. The actor, Rodolfo Tonetti (Erik Rhodes), is insufficiently prepped for the scheme, and, possessing a shaky grasp of English, he spends much of the night mangling the coded message that Egbert borrowed from Guy: “Chance is the fool’s name for fate.” The script only requires these three to flail about in an entertaining fashion until the road has been smoothed for Guy and Mimi, but they do so gamely. Rhodes has a delightfully weird smile to go with the undercooked ethnic humor, and both Horton and Brady are pleasant to be around. But every moment spent with any of them is another moment not spent watching Astaire and Rogers dance, and I just don’t think these particular characters are worth it.

It’s tempting to say that this is half of a really good movie, that if you chop off the slow start it’s right up there with the films that would follow it. But I’m not really all that keen on the last half-hour either. Rodolfo really is a superfluous character who gets fooled by Guy’s adorable shadow-play subterfuge for a length of time that beggars comprehension. The movie culminates in a pretty mild screwball routine, and the last-minute development that resolves the plot is a groaner. Despite all that, The Gay Divorcee is pretty good. Astaire and Rogers were highly appealing screen presences even when they weren’t on the dance floor. It’s fun watching them delay the inevitable; the car chase scene is a particular highlight. (Guy just so happens to have a “Road Closed” sign and a portable bar with him in the car. Don’t you?) I was almost ready to knock this movie down to three stars, but remembering that scene just changed my mind. My guarded approval remains intact.