In considering the merits of history-based movies, there are the rote facts and there’s the spirit that ties them together. Only pedants obsess over the former when the latter is sound. But on the other hand, it’s easy to fall back on facts and the importance of historical memory when a movie doesn’t have anything else to offer. The triple Oscar winner Glory, from 1989, was praised at the time for bringing a crucial historical event to the big screen at last. (This is still a familiar conversation after nearly thirty years.) The awards for cinematography and sound design, the participation of Civil War reenactors, and the recitation of letters by Colonel Robert Gould Shaw all testify to the care taken for the sake of authenticity. Quibbles aside, the film is a faithful representation of the experience of the 54th Massachusetts Infantry Regiment, the first Union regiment made up of Black soldiers. Between the lines, of course, it’s more complicated. Generally speaking, Glory is a well-meaning but blunted expression of progress and unity. It links arms when it should kneel. 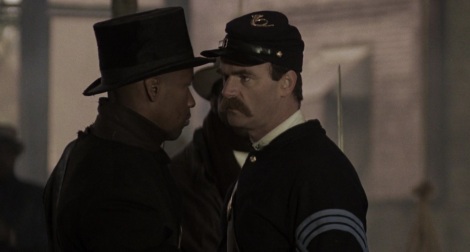 Director Edward Zwick drives his points home without a great deal of subtlety. Now, subtlety isn’t always necessary when the points are as good as they often are here, but this is a movie that seems to be about only one thing at a time. The first few scenes create a sensitive but truncated portrait of post-traumatic stress in the character of Col. Shaw (Matthew Broderick), who survives the devastating Battle of Antietam before being given command of the 54th. Much of the remaining plot concerns the efforts of the very young Shaw to get used to a leadership role. Friction with his men comes from two sources, the first being his difficulty with projecting the authority to justify how hard he pushes them. On top of this, there’s the pragmatic hesitation of Shaw’s subordinate officer and friend, Major Cabot Forbes (Cary Elwes), who believes there’s little point to combat training if the men won’t be allowed to fight. Thus begins a series of sequences in which Shaw advocates for fair treatment and the resources to make his unit a real asset to the war effort. These scenes show uncomplicated triumphs over obvious racism. In the tradition of Hollywood uplift, the impossible becomes inevitable within a handful of scenes. The one dramatically effective setback involves Shaw tangling with another Union colonel who orders Shaw’s men to burn a Georgia town. It’s the dirtiest of dirty work, a huge step backward, but Shaw allows it when threatened with the loss of his command and all the progress that had been made.

Interspersed with the scenes of Shaw learning how to do his job and being on the right side of history (which, again, has plenty of basis in fact), the film does pay some attention to the diverse personalities among the infantrymen themselves. They’re the familiar ragtag assortment, starting off at each others’ throats but giving their lives for each other by the end. Denzel Washington, earning his first Oscar with this film, gives a confrontational performance as a reluctant soldier named Silas Tripp who is, reasonably enough, suspicious of America’s commitment to racial equality. He’s also something of a bully, singling out the genteel Thomas Searles (Andre Braugher) — another friend of Shaw’s, and also, it must be admitted, an obnoxious nerd. The characterizations of these two are so broad that it’s easy to see Tripp’s point about Searles genuflecting for white approval. Still, the performers are both very sympathetic, so their conflict isn’t altogether rudimentary. Refereeing their fight is Morgan Freeman as former gravedigger John Rawlins. Freeman projects his customary authority — an undercurrent in the film, practically spelled out when Rawlins is promoted to Sergeant Major, is that in an equitable world Rawlins would be in charge of the unit — but the movie often exploits him for that reason, looking to him for a seal of approval. As the story reaches its conclusion, Tripp is duly chastened for his sharp tongue, sweeping away any potential challenge to complacency. 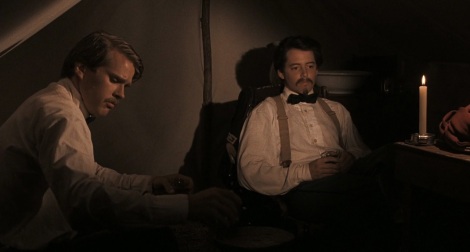 The film’s conclusion brings all its problems, as well as its strengths, to a boil. There are many unearned moments of uplift in the last half hour of Glory. The Black regiment, such a short time earlier an impossibility and a joke, is given a heroic sendoff. The coward volunteers for danger. Emotionally speaking, the victory isn’t even inchoate, it feels total. Then the actual battle begins, and the movie becomes a great deal more interested in reality, much to its benefit. The battle scenes throughout the movie pull off the trick of showing the chaos and brutality of war without making it particularly exciting. There’s a distinct beauty to the nighttime battle at the end, with the colorful flares shooting off into the sky, but it’s also gruesome and nerve-wracking. The movie’s triumphalism is tempered by the deaths of all the main characters. That this battle takes place on a beach feels appropriate. These men were every bit as brave as the first soldiers to land at Normandy, charging into the jaws of death so that those who followed them might have an easier path. The film makes a point of visually highlighting how a sort of equality is achieved in death. This point might have been more stinging had the rest of the movie not been so hopeful already. 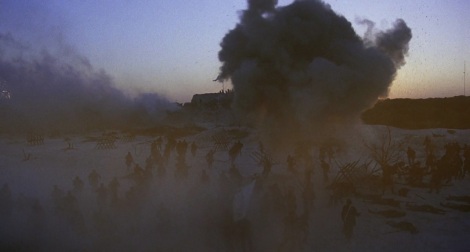 Glory is one of the movies I’d most dreaded revisiting. It’s exactly the kind of storytelling that can feel vital and powerful to someone in his late teens. Later, having become acquainted with people who are too cool for it, that someone might feel jaded about the experience even before reliving it. Thankfully, this movie isn’t a saccharine slog. It’s just a lot less essential than it felt that first time, and in retrospect I feel like there were some things about it that didn’t ring true even then. The humiliations of Braugher’s character and the ham-fisted James Horner score are the two elements that most needed a subtler approach. But they point the viewer in the desired direction. This movie was intended to be correct rather than great, and for whatever it’s worth, it basically succeeds in that goal.