In the words of Jean-Luc Godard, “Cinema begins with D.W. Griffith and ends with Abbas Kiarostami.” I’m fairly certain this quote had nothing do with my planning when, in early 2015, about a month after watching four Griffith movies I hadn’t seen before, I introduced myself to five movies by the Iranian master. The last two of these were his most recent films, the only two to be made outside his home country. The prospect of filmmakers from all over the world shooting films in various countries was an exciting one to me (and relatively new: in the twentieth century, there were examples of European filmmakers going to Hollywood and sometimes Mexico, but little else). Kiarostami shot Certified Copy in Tuscany, and then he made Like Someone in Love, set in Japan with an entirely Japanese cast. Borrowing my sister’s Netflix account, I watched the movie one afternoon, struggling at times with the subtitles. My first impression was that, while Kiarostami grabbed me right away with his usual formal surprises and pleasures, the story itself didn’t especially excite me. I began to nod off during some of the extended conversation scenes, though the movie’s ending certainly shook me awake. Having since caught up with several more of the director’s films, I felt it was time to give this one a closer look.

Like Someone in Love opens with a shot inside a restaurant, as a character, located just out of frame, engages in a one-sided conversation. Both times I’ve seen this film (viewings separated by three years, mind you), it took me a little while to understand this, between scanning the mouths of the different people onscreen and reading the subtitles. This formal decision has practical purposes, as the empty chair in the foreground will be filled by two other characters at different times, with the camera staying in the same position. But it also reminds me that Kiarostami didn’t speak Japanese either. He was stepping into an unfamiliar situation right along with me. The choice dramatically delays the first appearance of the film’s main character, a disembodied voice speaking on the phone, before a cut finally reveals her. The camera position is also the first of several examples of parallelism in the film. Near the end, another character will get an extensive dialogue before ever being seen. Likewise, there will be two scenes of a car driving around a stationary person, and two awkward conversations that take place while one character waits for another to return. The woman on the phone, Akiko (Rin Takanashi), will be asked by two different people about her resemblance to a certain photograph, a question that drives the main plot.

Some of these poetic pairings are easy to miss after just one viewing, so I was gratified to catch them all this time. There are plenty of immediately grasped aesthetic joys, though, many of them taking place at one of Kiarostami’s favorite shooting locations: a moving car, with the camera placed on the hood or alongside a window. The lights of Tokyo are shown in gorgeous arcing reflections as our gaze remains fixed on Akiko in the backseat of a cab. Akiko, a call girl on the way to her next client, is often seen in such a mediated fashion, reflected in glass or the inky maw of a flatscreen TV. The man she’s to meet, an old professor named Takashi (Tadashi Okuno), seems to want companionship more than anything physical, and after their night together, he volunteers to drive her around the city. While behind the wheel, he also meets Akiko’s boyfriend, Noriaki (Ryo Kase), the other side of that initial phone conversation. The old man finds himself drawn into the middle of a fraught relationship, with Noriaki making false assumptions about both him and, apparently, Akiko. 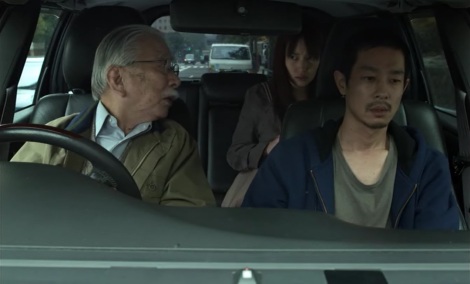 It’s a very simple story with a handful of characters and only a few hints at backstory. The first hour is mostly spent just getting to know these people, and then when the intimations of conflict appear, they simmer for quite some time. In principle, I have no problems whatsoever with the slowness, and the themes — misplaced desires, loneliness, shame, regret, jealousy — are perennial. But as they play out in Like Someone in Love, I feel that these ideas start wearing a bit thin. Kiarostami’s take on a different culture is respectful, but it’s also safe — compact to a fault. Those two waiting scenes, though not without their humor, really drag for me. Even so, the closing scene is a masterpiece of down-to-earth fear and dismay. With startling abruptness, a movie that had been defined by quiet introspection, a movie rapturously in love with glass, hits a high note and ends without resolution. It’s brilliant and perplexing, and I wish I felt like the rest of the movie earned it.

So, needless to say, my nagging hesitations with this movie have crystallized now. Writing about movies is a valuable thing. In this case, and others, the expectation of putting words to my thoughts forced me to get a firm handle on the plot and characters. My memory is, as always, hazy, but the first time I saw this, I likely didn’t put together that the jealous boyfriend of the end of the movie is the same person to whom Akiko speaks on the phone at the beginning, questioning her about where she is and with whom. Hence, the ambient threat of confrontation actually runs through the whole story, however far into the background its gets pushed as Akiko thinks about other things. This is a delicately made movie, and I appreciate many things about it. But I still think it’s thin by Kiarostami standards. (Yes, those standards are stratospheric, so of course I’d still take this movie ahead of a great many alternatives.) Regardless, Kiarostami’s death in 2016 remains a profound tragedy, as he was still making fascinating creative choices, still experimenting. Cinema doesn’t have to end with him, by any means, but there are few like him working today. Certified Copy, Taste of Cherry and Where Is My Friend’s House? remain my favorites of his, with Like Someone in Love holding fast a few rungs below, at 3 ½ stars.