As it turns out, two things can be true at once. First, with the aid of a couple different subscription services, I’ve been able to see more movies from the current year to date than ever before (89 as of this writing). I’ve seen all kinds of things, but there are plenty of films I haven’t caught up with yet. Five of them appeared on my “most anticipated” list for 2018. In other words, I’ve only seen half of that top ten, easily the poorest showing since I started this exercise. Why did I decide to see 84 other movies instead of those five, you ask? As always, there are a number of factors that can’t be reliably predicted, though I hope I’m getting better at knowing when movies from different parts of the world will reach me. Everybody Knows will hit U.S. theaters this February; The Man Who Killed Don Quixote and Ophelia are both in limbo, having been dismissed by the few who have seen them. The remaining two films have been delayed altogether. Scorsese’s The Irishman should hit Netflix at some point in 2019. As for the next Terrence Malick movie, trying to guess when and where it will finally bow is a game I have yet to master.

So I press on. The odds are good that, in another few months, I won’t be able to name all ten of the following films off the top of my head. Anticipation, particularly when projected over an entire year, is basically junk science. For every Before Midnight or Interstellar that I correctly highlighted as a potential favorite, there have been two or three disappointments. I don’t mind that. These lists have no greater purpose than to highlight movies that look interesting to me. So here are some of those. It should be a good year. I couldn’t bring myself to include Detective Pikachu as a guilty pleasure, but I’ll put it out there right now that Detective Pikachu will be one of the 80 or so other movies that I’ll see when it arrives in my neck of the woods.

This zombie movie, rather than Zombieland 2 or World War Z 2, makes my list for the obvious reason that it’s a Jarmusch movie, not a belated sequel. I’m really not sure what he’ll do with the genre. Erudite vampires were a natural fit for him, but mindless cannibal hordes? I don’t want to guess; I’m sure it will be amusing.

The Playlist put this movie on their list, so if it doesn’t premiere next year, I won’t be the only one with egg on my face. Shooting was supposed to begin in early November and conclude just over a week ago, and knowing the scale of Reichardt’s past movies, it’s not a stretch to expect the whole process to be completed in time for a 2019 release. Regardless, it will be another western from the woman who made Meek’s Cutoff.

Ang Lee directing a thriller about an assassin fighting a clone of his younger self sounds fun enough as it is. But apparently the idea, which has been kicked around Hollywood for twenty years, is that the “clone” will be a CGI character, utilizing the “de-aging” technology that’s been seen in some notable recent blockbusters. It’s a technology I haven’t liked much so far, but this looks to be a creative, and perhaps even introspective, use of it.

Like Rees’s last movie, Mudbound, this will be heading to Netflix — one of many reasons that dastardly company will keep getting a subscription out of me for the foreseeable future. I really liked both Mudbound and Pariah, and this one, a political thriller adapted from the Joan Didion novel, looks intriguing.

These next two movies will (ostensibly, at least) be the English-language debuts for a couple international masters of “slow cinema.” This one is being described as “science fiction,” with a premise similar to that of Invasion of the Body Snatchers. I can’t wait to see what Hausner does with the slow-rolling horror of that idea.

Plot details are even sparser for this movie, but they’re probably already sufficient. This movie will explore the Colombian jungles (the director’s first movie outside of Thailand), with Swinton and at least one other character whom Apichatpong describes as “maybe an alien, I don’t know.”

This is my Sundance pick for the year. It’s time for another lesson in expectations and reality. The 2018 Sundance Festival produced five movies that I would eventually come to rank among my favorites of the year. None of them made my “most anticipated” list a year ago. The festival also produced a movie called Ophelia that, as I’ve mentioned, I haven’t been able to see yet. So I’m just throwing this documentary out there because I find the concept interesting and poignant. I hope I don’t forget all about it in a few months.

If I were ranking these, this would have to be number one, and it wouldn’t be very close. This is already the movie title that Tarantino was born to make, and maybe the premise will be invigorating for him as well after a decade of arguable decline. A sprawling film about Manson-era Hollywood is going to be pretty much impossible to ignore, like it or not. The subject matter and setting put this closer to Pulp Fiction than anything else Tarantino has made, so that’s exciting.

After Snowpiercer and Okja, two ambitious and international films that I didn’t love as much as his earlier work, Bong Joon-ho is getting back to the basics with a Korean family drama. The distribution company Neon has secured the rights to this film, making it more likely that I’ll actually be able to see it next year. 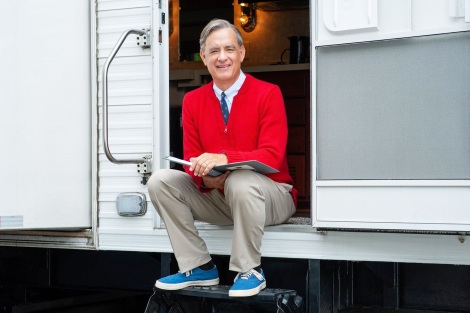 This Fred Rogers biopic (which might be released under a different title when all is said and done) seems like a no-brainer. This year’s Rogers documentary Won’t You Be My Neighbor? has already been terrifically successful, though I wasn’t as enchanted with it as I’d hoped to be. I liked Heller’s Can You Ever Forgive Me?, so I’m hopeful that she’ll do something more interesting than the standard hagiography. I think I’m more skeptical of the Hanks casting than most (he’s too big!), but I’m sure he’ll be able to summon some twinkles in those eyes of his.

Error: Twitter did not respond. Please wait a few minutes and refresh this page.