Probably the main reason that Hamlet has been such a popular subject for cinema from its very beginning — besides representing a grasp for artistic legitimacy in those early days, and Shakespeare’s undying popularity in general — is the affinity between the motion picture image and the idea of a ghost. The early film pioneers discovered that double exposure was the best way to make a “ghost” onscreen appear both real and incorporeal, and after a century of innovations, it still might be the best way. As for the ghost of Hamlet’s father, some filmmakers don’t try any special effects at all, letting the performances (and perhaps costuming or colored contact lenses) do all the work of signaling the character’s otherness. I wish this weren’t so often the case. Laurence Olivier’s terrifying specter hasn’t been topped in seventy years, and I think it could be if someone put in the effort. Grigori Kozintsev’s slowly striding giant, Tony Richardson’s off-screen flash of light, and Stephen Cavanagh’s Blair Witch-meets-Bigfoot figure in the distance all have their own spookiness to them. But the Olivier version has the most credibility in commandeering Prince Hamlet’s life to suit its purposes.

I’d expand my position on the ghost to a more general rule about the movies listed below: when I’m watching a Hamlet movie, I want the emphasis to be on “movie.” I want the material to be conformed to the promise and powers of cinema, not the other way around. And so, it’s the looser adaptations that tend to grab me. Six of the movies below aren’t even in English. Two of the others are mostly or entirely scripted with non-Shakespearean dialogue. The other two, the most “faithful” adaptations of the play to make the list, are ranked ninth and tenth. All this despite my abiding love for Shakespeare’s poetry and wordplay. What exactly happened to keep Olivier, Richardson, Zeffirelli and Branagh off my list? Maybe it was the same thing that made me regret excluding stage performances from my retrospective. After twenty-seven movies, I’m itching to see Hamlet in his natural habitat. It could very well be impossible to plumb the depths of Shakespeare’s play in a movie adaptation: this play that so hangs on “words, words, words,” rather than “images, images, images.” (Yes, there’s more to theater than words and more to cinema than images. The difference in emphasis, though, is clear.) At any rate, all the movies we have so far are flawed in some way or other. They tend to simplify the play’s ambiguities: the ghost is always telling the truth, Claudius is often pure evil, Hamlet is basically a hero despite what he does to Polonius and his children. But all of my favorite Hamlet films also get something right, and more importantly, they’re just well-made movies.

I’ve greatly enjoyed taking a much closer look at this play over the past month — its plot twists, its elaborate metaphors, its bawdy puns, its baked-in drama criticism. Above all, of course, there’s the central character, an avatar of depression, world-weariness and self-sabotaging passions. Just as the play as a whole has yet to be adapted into a movie that I would consider a masterpiece, it’s difficult to say who was the best Hamlet in this bunch. Most of the actors bring a distinct intelligence to the role, and, like their films, I prefer to see them as facets in a diamond too big for any one person to hold. (Also, Olivier is the boring and also probably correct answer.) So, finally, here are my favorite facets. 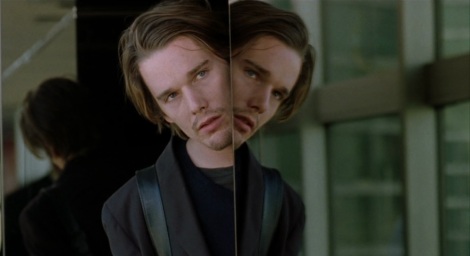 Far from the first movie to transplant Hamlet and company to the modern world of business (at least three older examples can be found below), Almereyda’s version will always be the most famous, hitting as it does on just the right imagery to join Hamlet’s malaise with the numbing rush of a modern city.

You can see why I put the word faithful in scare quotes above. The dialogue is all Shakespeare, but the colorful nightmare presentation of the drama is, as far as I can tell, unprecedented. The doubling and conflation of characters is an ingenious way of paring things down to the essentials, plus Helen Mirren shows up in purple body paint at one point.

Kurosawa’s bleak portrait of postwar business corruption was a lot to take in on first viewing, but there’s no denying his skill with staging, whether in the geometrical precision of certain compositions or the way a car’s headlights reveal a “ghost” on the road ahead. Toshiro Mifune gives the best performance among the non-Hamlet Hamlets.

So visually and thematically rich that I didn’t even need to know what the characters were saying (the European DVD didn’t include subtitles) to be captivated by it, Käutner’s own postwar take is an incisive look at the evils done in the name of order and prosperity.

“The Mousetrap” is presented as a farcical silent comedy, and it does “catch the conscience” of its intended audience, though not in the way a wannabe Hamlet named Yvan envisioned. Through a metatextual exercise, this is one of the few Hamlet films to critique its protagonist and his surety.

I could have avoided embarrassing myself in front of Shakespeare scholars by saying this movie doesn’t have enough in common with Hamlet to merit inclusion. But I’m ranking according to personal preference, not faithfulness to the source. I still find The Lion King rousing as spectacle, one of the last big swings Disney animation ever made, and obviously a successful one.

This Turkish film is without question the most flamboyantly odd Shakespeare film I’ve seen (move over, Luhrmann, Jarman and Greenaway), and, given my chronological viewing, it paved the way for me to appreciate seeing Hamlet get remixed and presented with a unique tone by a couple other far-flung cultures (see #2 and #1).

Maybe it’s false advertising. Maybe Stoppard isn’t capable of staging a complete Hamlet with the same liveliness and visual wit of the snippets we get here. It’s easier to be brilliant in small doses, surely. Even if that’s the case, the imagination is given plenty to work with here. (My ranking also reflects the often-hilarious Rosencrantz and Guildenstern scenes, naturally.)

This movie picks up where Käutner, Kurosawa and Chabrol left off, both in their jaded modernizations of the text and in their ideas about class conflicts. It’s also funnier than the two straightforward comedic riffs on Hamlet (Strange Brew and Tommy Boy).

I look forward to watching this movie again, maybe in a couple years, when the viewing does not arrive on the heels of a couple dozen other Hamlet movies. Because at the moment, what I love about it is how it seems to bring together all the good stuff in the earlier films while avoiding the suffocating correctness (or, sometimes, simple ineptitude) of the bad ones. Sure, if you want Hamlet the way Shakespeare wrote it, not only in terms of language but how the characters are conceived and the implications of its cultural context, then obviously this isn’t the version for you. But Haider takes that framework and makes a thoroughly satisfying movie out of it. I don’t think I could ask for anything more than that.