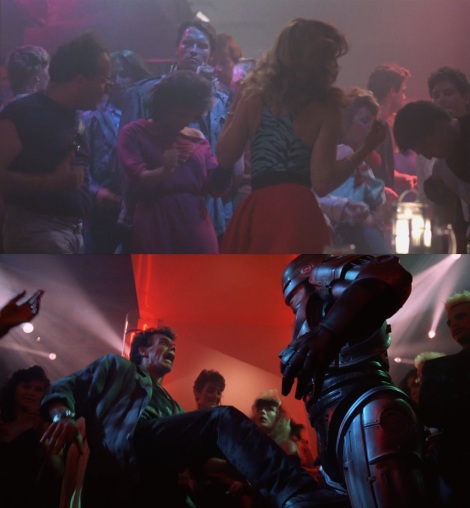 There are several interesting ways of contrasting these two landmark films about cybernetic organisms, or cyborgs. One could play up the dystopian angle, thinking of RoboCop as the Brazil (or Brave New World) to The Terminator‘s 1984. Both narratives borrow some of their shape from cinematic fads that began in the 1970s: slasher films (The Terminator) and comic book superhero films (RoboCop). One story is about humanity’s desperate effort to survive a takeover by technology, while the other is about the familiar struggle to wield tech as a weapon. But the cleanest and most obvious difference is that one cyborg is a villain and the other a hero. Where the organic components fit into the equation makes all the difference.

The “Cyberdyne Systems Model 101” Terminator (Arnold Schwarzenegger) is the most advanced of his kind in the year 2029. As with the “more human than human” Replicants in Blade Runner, he is the first cyborg who can successfully blend in as a human. (Of course, the eternal irony of the film is that Schwarzenegger will stand out in any group, regardless of how realistic his “skin” is. But he insists on finding clothes and sunglasses anyway, an oddly polite move.) The fleshy exterior is purely a ruse, though (as well as a necessary element in traveling through time, according to the rules of the film’s universe). While the machine does sustain physical damage requiring attention, he tends his “wounds” without any sign of pain or discomfort. Even, at the end, when all the flesh is burned away, the metal skeleton continues with its mission, truly earning the character comparisons to implacable slasher villains — those near-mystical figures who keep getting back up despite appearing to be at least a little dead. The Terminator’s stony demeanor, executed with such conviction by Schwarzenegger, tells us all we need to know about how much humanity is actually inside him. The cyborg never takes a breath to ponder his assassination objective, much less question it. 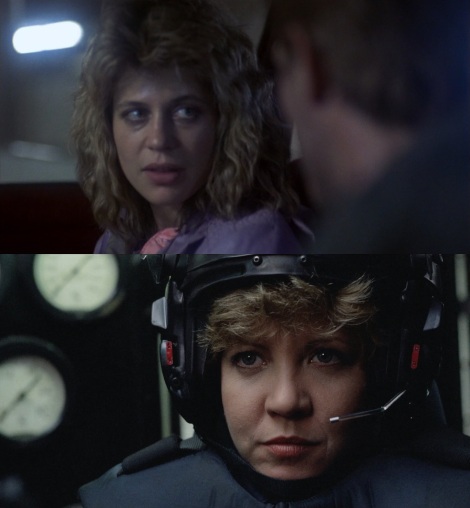 The presence of humanity within the machine doesn’t appear in the Terminator himself so much as in the curious doubling between him and Kyle Reese (Michael Biehn). They both enter the film naked (again, as per the rules of time travel) and have little choice but steal clothes off someone’s back. They steal guns as well. They search the phone book for someone named Sarah Connor. Notably, these two characters are presented to us through action alone. We don’t even hear their names until nearly forty minutes in. The Seattle critic Michael Strenski, in his Letterboxd review of The Terminator, went so far as to suggest that Reese’s function in the story is a mystery until the “Tech Noir” scene, where he rescues Connor (Linda Hamilton). There’s something to that, though I would contend that it’s pretty clear early on he’s a good guy. He registers pain and confusion on his first appearance, unlike the Terminator. He doesn’t kill anyone. He has a nice little “cool guy” branding moment putting on Nikes while hiding in a photo booth. Crucially, though, he’s also a wild-eyed man in a trench coat, so from Connor’s point of view, he could easily be the guy who’s been going around killing people who share her name. That’s the genius of director James Cameron’s slow-motion filmmaking at the Tech Noir nightclub, a stirring little exercise in dramatic irony. From that scene on, at least, the stakes are clear and simple, with our sympathies directed entirely at rugged, struggling humanity. 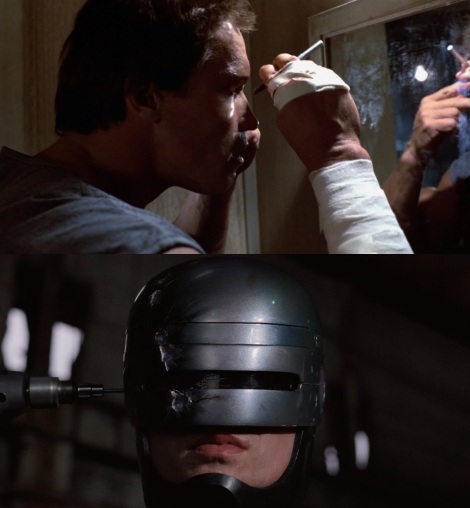 RoboCop is about an altogether different kind of cyborg. Rather than a machine made to look like a man, this is a man given the powers of a machine. The prosthetic surgery is done to him without his knowledge and with only tacit consent, after he has technically died. Alex Murphy (Peter Weller) begins his afterlife with a similar straight-faced march to obey orders as the Terminator, but something fascinating happens to him forty-five minutes into the movie. As another character describes it, he dreams. It’s an unpleasant experience, a nightmarish recollection of his own death. Far from an unfeeling automaton, RoboCop is shaken by post-traumatic stress into reawakening the human being still inside him. The central fact of Alex Murphy’s character arc is agony, both before and after his transformation. While he can sustain just as much punishment as the Terminator, from bullets to explosions, it all clearly takes a much bigger toll on him. That toll is as psychological as it is physical. The Terminator has precisely two enemies who are able to do anything to slow him down. RoboCop has to face coordinated attacks from his fellow police officers and from the corporation that built him. He’s really more like Sarah Connor, having only one ally (fellow cop Anne Lewis, played by Nancy Allen).

Existing at the intersection of business (Omni Consumer Products, of which he is one) and public service, RoboCop actually turns out to be a good cop, despite all appearances of being the reductio ad absurdum of the take-no-prisoners Dirty Harry archetype. His prime directives — “Serve the public trust, protect the innocent, uphold the law,” presumably arranged by priority — have an Asimovian logic to them. The classified “Directive 4” notwithstanding, the engineers appear to have been careful in ensuring he always does the right thing, however coldly. And so he emerges triumphantly into the Detroit night, a combination of Superman and Batman. He foils robberies and rape attempts and successfully muscles his way into a hostage situation. The only thing that trips him up is the simple fact that the real bad guys are sometimes to be found in boardrooms rather than back alleys and convenience stores. But as he reclaims his humanity, he becomes able to process this betrayal and assert more independence. The lone fighter taking on a corrupt organization is an idea that goes back to American Westerns, something of which Dutch director Paul Verhoeven seems to be acutely aware. It can be no accident that Murphy’s signature move is twirling his gun. 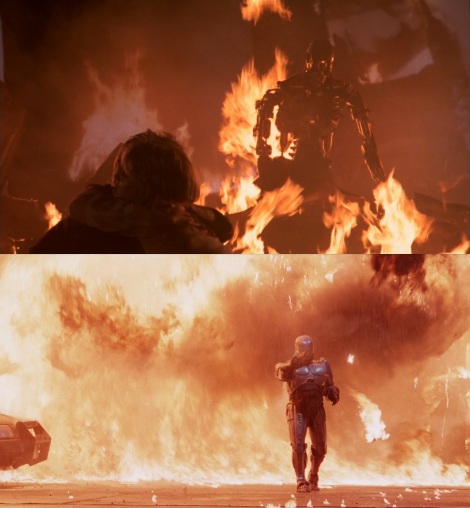 There are other machines at play in these stories. James Cameron draws links between the human-hunting hover crafts of the future and the garbage trucks and construction vehicles of “today,” showing that there’s some continuity between a world in which we use machines and one in which they use us. At the climax, Sarah Connor and Kyle Reese enter a factory, where Reese starts switching on all the machines in a futile attempt to provide cover for them. And of course, finally, a hydraulic press provides the killing stroke. Fighting fire with fire is necessary. Despite our heroes’ earlier limited success with homemade nitroglycerin and pluck, it takes a machine to kill a machine. Verhoeven has even more fun with futuristic technology. There’s a running joke in RoboCop‘s news broadcast interludes concerning technological mishaps, and the ED-209 robot made to compete with RoboCop is a lumbering disaster. The only future tech that proves to be absolutely reliable is, naturally, the firearm, whether large or small. Those things do what they’re supposed to do, because all they’re supposed to do is destroy. Each in its own way, these movies manage to find creativity amid the destruction, and humanity in a world of machines.