Consistently regarded as one of the world’s very greatest filmmakers, Federico Fellini is a daunting subject. Developing a bombastic and playful style, he is one of the few who can claim to have worked practically in his own private genre of movie, unmistakable and nearly inimitable. At the same time, the more distinctive the films of his later career became, the more contentious was the response, with some critics going so far as to draw a line in the sand after his masterpiece 8 ½ (1963). Despite the circus atmosphere and the parade of buxom women in many of these works, and an overall comedic spirit in stark contrast to the more austere or academic tendencies of Bergman, Ozu, Antonioni and the French New Wave, Fellini now occupies a place right alongside them — that midcentury group of canonized European and Japanese filmmakers that have been considered great for so long, some people have tired of talking about them. So it was that this January, the centenary of Fellini’s birth was duly marked by the established critics and film historians, but, as far as I could tell, Film Twitter had little to say about it. Fashions always shift, and it can only be a good thing that the attentions of younger cinephiles have turned to less celebrated corners. Still, Fellini is worth studying, and after I completed my Hamlet retrospective, I decided to watch all twenty-one Fellini movies. I did so at the gentle pace of one per week, so as to get more time to study and savor. 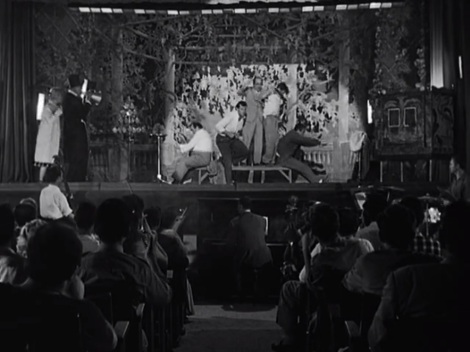 Fellini’s movies can be cleanly subdivided into five or six groups. His first directorial efforts were done under the umbrella of Italian Neorealism, the postwar movement that focused on capturing life on the street in a devastated country. Fellini’s contribution to the style followed the old maxim “Write what you know.” As a middle-class kid from the small town of Rimini, he could relate to the strivers and dreamers who adored the magnificence of Rome from a distance, like the main character in The White Sheik (1952), the movie Orson Welles considered to be Fellini’s best. There were also the small-time cons of rural areas, the users and abusers looking for a way out. He had a special knack for the latter: unlikable characters who took what they wanted until they couldn’t anymore, in movies like I Vitelloni (1953) and Il Bidone (1955). Into this sordid caravan came the brilliant comic actress Giulietta Masina, Fellini’s wife, to portray the victims of these abusers in La Strada (1954) and Nights of Cabiria (1957). It wouldn’t be the last time she’d provide a meaningful counterpoint.

The year 1960 is seen as a major turning point in film history, with the likes of Breathless, L’Avventura and Psycho landing with a bang and pointing the way to something new. From Fellini, of course, the revolutionary film was La Dolce Vita, his three-hour Roman opus that won the Palme d’Or at Cannes that year. The film was his statement upon finally arriving in the Eternal City and not quite liking what he saw there. Famous for the opening image of a statue of Christ carried by a helicopter, Anita Ekberg wading around in the Trevi Fountain, and the character name Paparazzo that became the source of a new word, La Dolce Vita inaugurates the second kind of Fellini movie. One might describe it as the episodic survey of a decadent society with a detached protagonist who in some sense stands in for the director. These movies are an informal trilogy that cover three periods in Italian history: contemporary society in La Dolce Vita, ancient Rome in Satyricon (1969), and the eighteenth century in Casanova (1976).

After the triumph of La Dolce Vita came one of the boldest and most successful gambits that any director ever attempted, 8 ½, a thinly veiled piece of autobiography and fantasy: a movie about a director who’s having trouble finishing his next movie. Viewed immediately after Fellini’s previous work, 8 ½ feels even more sui generis, full of winking flights of fancy, characters popping into the frame from every angle, an intoxicating brew of self-glorification and self-deprecation. In the end, we are given an image of the director as a benevolent dictator, who also happens to be a kinda-sorta repentant philanderer. Fellini carried the same energy into his first color film, Juliet of the Spirits (1965), which forms a diptych with 8 ½ and, once again, turns its gaze to Masina, who stayed with Fellini for fifty years, until his death in 1993. A third movie that at least partly fits into this phantasmagorical genre-unto-itself is City of Women (1980), which, like La Dolce Vita and 8 ½, stars Marcello Mastroianni as a Felliniesque figure.

As the 1960s gave way to the 70s, Fellini did some work for television, turning out unusual hybrid works that generally fit the description of mockumentary. (In fact, it’s been argued that this particular often-imitated genre is a Fellini invention.) These are also autobiographical, or at the very least personal, while at the same time poking fun at any kind of genuine self-analysis. Fellini: A Director’s Notebook (1969) is a simple, hour-long look at the upcoming Satyricon and the director’s creative process, while I Clowns (1970) is the most in-depth examination of Fellini’s love for the circus and other disreputable forms of show business. A transitional work followed: the 1972 theatrical release Roma, which is in part a movie about Fellini trying to direct a movie about Rome, and which also incorporates flashbacks about the filmmaker’s childhood, a subject that would be a focus of later films from Amarcord (1973) to Intervista (1987). The latter is also a layered mockumentary of sorts, with some scenes taking place in a movie-within-the-movie-within-the-movie. Another film structured by fake interviews is the multifaceted allegory Orchestra Rehearsal (1978).

Juliet of the Spirits

With that, we have the five kinds of Fellini movie: (1) Neorealism, (2) Essays on Decadence, (3) Phantasmagoria, (4) Mockumentary, (5) Nostalgic Autobiography. This leaves three of his last movies unaccounted for. We can describe a sixth category for Ginger and Fred (1986) and The Voice of the Moon (1990), movies by an aging filmmaker exploring contemporary Italian culture. These arguably fit in Category #2, but they are more tender and accepting. Dave Kehr wrote of Ginger and Fred in the Chicago Reader that Fellini was attacking Italian television in the mid-80s for “borrowing and debasing his own flair for the grotesque and excessive,” but I didn’t find the film to be all that curmudgeonly. Instead, the television program at the film’s center demonstrates the same frenetic desire to please that can be seen in the director’s first film, Variety Lights (1951). Finally, the one movie that doesn’t quite fit into any category is And the Ship Sails On (1983). This is another piece of nostalgia, but it takes place in 1914, before Fellini was born. There are affinities with Amarcord and the showbiz comedy-dramas, and even with Juliet of the Spirits (a séance scene). There is also political commentary that comes through more forcefully than in the movies where the director was perhaps a bit distracted by his own memory. More than anything else, there is nostalgia for the artifice of cinema itself, with an entire Mediterranean voyage actually being filmed within the microcosm of Cinecittà Studios. 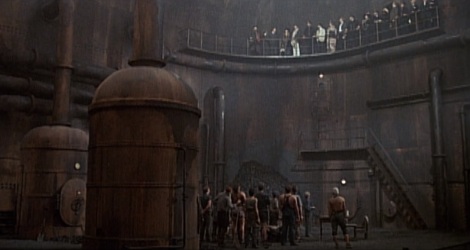 And the Ship Sails On

That sums up Fellini, for me. It’s all a big show, gloriously fake but no less personal for being so. His films rarely rise to the level of genuine satire. The shadows of Fascism and the Catholic Church are often little more than sources of outlandish pageantry. The “ecclesiastical fashion show” in Roma is not the kind of cutting rebuke one might find in a Buñuel film; it’s just another amusement. Mussolini’s goons in Amarcord may be bullies, but they also have a flair for spectacle. Although these figures were childhood boogeymen for the director, he grew out of fearing them. The open-endedness of these portrayals can be frustrating, as can Fellini’s tendency to turn inward, but at his best, he shows immense gratitude for the art form he loves. The glimpses into his childhood are always forthright and good-humored about cinema’s role in his sexual awakening, and the ending of 8 ½, despite being baldly egotistical (every person in the director’s life is just a character in his story), is an irresistible image of inspiration and reconciliation. And the later films, while less exciting than the masterworks, have their own wistful charm. The final moments of his final film, The Voice of the Moon, are especially poignant, a plea for quiet and understanding from a filmmaker who was finally finished with documenting all the noise in the world.