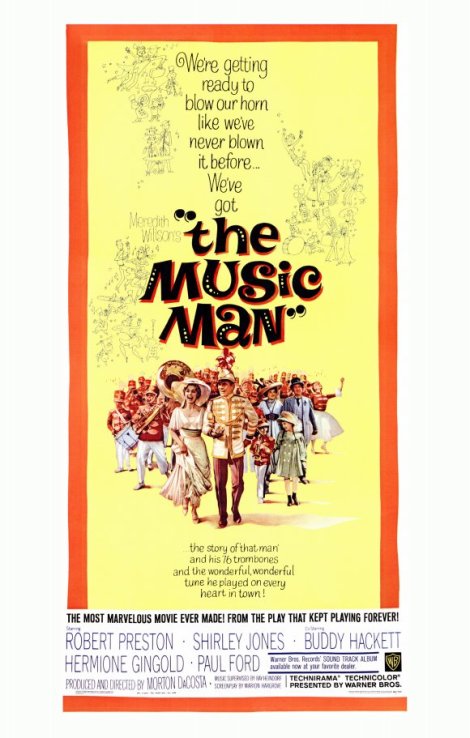 So this guy, he persistently lies to an entire community by stirring up groundless anxiety and proposing an elaborate solution he’s not at all prepared to follow through on; he cheats at least a dozen families out of a good deal of money and saddles their kids with expensive instruments they don’t know how to play; and yet everybody loves him for it.

The Music Man is a full throttle musical, so much fun that I often forget it’s two and a half hours long. It is a competently made film, but most of the credit for its success has to go to the stage play of which it’s a faithful adaptation. Theatricality, while it can be a barrier between a film and its audience, works very well in the musical genre. After all, literalism is out the door when characters who say they can’t sing suddenly find out they can. The heightened awareness that everything is a performance only complements the movie’s central character, who is never not performing. And what better subject for a musical than the allure and transformative power of music itself?

The film is a period piece, taking place in 1912 in the small town of River City, Iowa: a quiet, staid farming community influenced by the Temperance movement and just beginning to see the encroaching influence of twentieth-century culture in the form of pool halls and ragtime. There’s an unmistakable sense of nostalgia to the film — a classic example of the adage “those were simpler times” — but Meredith Willson’s story pokes fun at the local residents and their provincial attitudes from start to finish. A single smooth-talking con artist (played by Robert Preston) hoodwinks all of them into believing he can simultaneously bring something completely new to town and restore a sense of traditional values in their children. He gets a whole gymnasium full of people to mime a marching band and take it out into the street without their having heard a single instrument. Meanwhile, the ladies of the town crusade against the corrupting influence of Persian, Middle English, and French literature. So most River City-sians are dim bulbs, prone to mob mentality, but they’re also completely lovable.

Only one of them fails to be impressed by the “traveling salesman” who calls himself Harold Hill. She is, of course, Marian Paroo — Marian the librarian (Shirley Jones). She’s too smart for this town. That is the only logical explanation for her singleness, since she has every intention of finding someone to marry. In the meantime, she tries to use the library and some piano lessons to open people’s eyes to culture beyond their own little world. Her efforts at rousing the town’s young people to the genius of Omar Khayyám are, sadly, unsuccessful. And teaching piano doesn’t have much of an effect either. But in a surprising twist, “Professor” Hill swoops into town and accomplishes what she can’t, by creating a love of music in the community. Although the older ladies accuse her of recommending “smutty” books, things don’t really get lascivious in the library until Harold starts serenading her there. And then he turns around and gets those ladies singing and dancing as well. He smashes prejudices and old power structures, opening a channel for Marian’s voice to finally be heard. 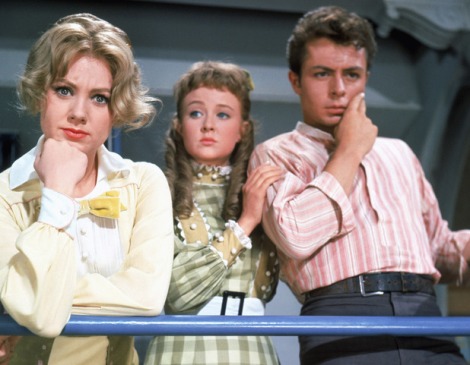 That’s why the love story works. Marian quickly learns that Harold is preparing to swindle the town, but when she sees the joy and excitement he brings — and most crucially when she sees the positive effects he has on her little brother Winthrop (Ron Howard), who had become morose in the two years since their father’s death — she decides not to expose him. Even though his advances toward her are, at first, just an attempt to beguile the last skeptical person in town, she falls for him anyway. This would be very depressing if he didn’t fall for her too. But he does when he finds out she’s had control of the situation all along. Here, among all these people he’s been playing for fools, is an equal. While he had been congratulating himself on never making a misstep, suddenly he realizes it never would have worked without her cooperation. The slow development of their relationship, only paying off in the final minutes, is one of the story’s great triumphs. 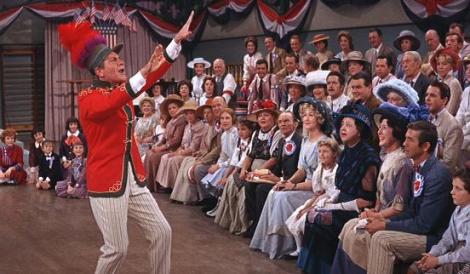 The main thrust of the plot — the setup of Harold Hill’s con — is developed through songs. This is entirely appropriate, because his goal is to get past these people’s heads and speak directly to their hearts. The best indoctrination comes through simple rhyming, rhythm, and melody. That way, people naturally memorize it before they question it. We in the audience get swept up too, even though in the back of our minds we might think, “You know, Harold, there are a whole lot of letters that rhyme with ‘P.’ Your syllogism is deeply flawed.” Because his argument truly hits a nerve: our boys are turning to vice for their amusement, so what they need is alternative amusement that will instill discipline and order. Today, we might roll our eyes a bit at the thought that a pool table could be feared that much, and the movie rolls its eyes right along with us, but let’s not forget what happened to Pinocchio. Harold has the con artist’s gift for psychoanalyzing his marks and proposing the right solution to their problems. Later in the film, he creates both literal and figurative harmony among the bickering school board members by making them a barbershop quartet. He’s a pied piper; he plays the town like a fiddle; and ironically, he can’t actually play either instrument.

Robert Preston, the definitive Harold Hill of stage and screen, is what makes the concept work, because even though his character is still planning on skipping town very late in the film, there isn’t a single moment when he isn’t likable. Theoretically, this man is an antihero, a thief and a liar until he’s reformed at the eleventh hour. But it feels like he earns every penny from sheer tireless effort alone. He’s more entertainer than grifter. At any rate, when he reaches his lowest point his efforts are vindicated in a surprisingly genuine way. The boys’ band appears and starts to play. Considering they haven’t been given any meaningful instruction and have only had the instruments for a few weeks, they could have sounded a lot worse. But that’s beside the point. Their parents beam with pride simply because they’re trying. The kids don’t have to be perfect to get affirmation.

Now we’ve reached the film’s closing scene. I don’t take it any more literally than the other music sequences. It is an exultant vision of a united community. It’s also a metaphor combining all our civilization’s ideas of a “happy ending”: a curtain call, a wedding, and a jubilant parade that, for all I know, has never stopped.

One response to “My Favorite Movies: The Music Man”