The formula could be expressed thusly, matching up with the chronology of the three films’ premiere dates: Mary Harron’s Charlie Says (Venice Film Festival, September 2, 2018) intends to demythologize the Manson Family and its leader, Daniel Farrands’ The Haunting of Sharon Tate (limited theatrical run, April 5, 2019) re-mythologizes them, and Quentin Tarantino’s Once Upon a Time… in Hollywood (Cannes Film Festival, May 21, 2019) does first the latter and then, climactically, the former. Thesis, antithesis, synthesis. A pat summary, perhaps, but the fascinating thing is that these movies, all of which deal to some degree with the same historic event, don’t step on each others’ toes in terms of perspective. Another way to distinguish them would be to say The Haunting of Sharon Tate is about the buildup to the event, Once Upon a Time… in Hollywood is about the context, and Charlie Says is about the aftermath. By these methods, the films respectfully avert their eyes from that central event: the murder of the pregnant actor Sharon Tate and four others on the night of August 8-9, 1969.

As recently as five years ago, I didn’t know much of anything about what the Manson Family actually did. Charles Manson was more of an idea than a person during my childhood, a personification of evil. Bare statistics can’t account for this. It must have had something to do with the nature of the crime, the identities of the victims — though I had no curiosity for these facts growing up. I’m pretty sure I learned about the rape charge against Roman Polanski before I learned about his marriage to Tate. My education came in the summer of 2015, when Karina Longworth’s podcast You Must Remember This did a twelve-part series on Manson, Tate, and the Hollywood figures who came into contact with them at one point or another. Now, coinciding with the fiftieth anniversary of the murders, we’ve been given a small glut of cinematic offerings on the subject.

Charlie Says gives the most serious treatment of the events, focusing on the perpetrators rather than the victims but also emerging as the only film of the three to depict the murders of Leno and Rosemary LaBianca the night after the Tate murders. Weaving through flashbacks of Manson (Matt Smith) and his cult on Spahn Ranch, the film tells the story of the writer Karlene Faith (Merritt Wever), who visited Family members Leslie Van Houten (Hannah Murray), Patricia Krenwinkel (Sosie Bacon), and Susan Atkins (Marianne Rendón) in prison. Her goal was to research the nature of the cult, in an attempt to understand its members and perhaps deprogram them. In this way, the movie is the empathetic flip side to a project like Netflix’s Mindhunter.

Harron’s task with this movie was not an easy one. Cults always look ridiculous from the outside, but the undertow that followers experience — “I used to think that was ridiculous too, but now I know better” — has an undeniable power. The film depicts Van Houten succumbing to Manson’s allure, his promise of a clean break from her old life, while always maintaining that outside perspective. His demented race-war scheme notwithstanding, Manson was first and foremost a resentful wannabe musician, taking impotent, misdirected revenge on the record producer who spurned him. Harron’s interest isn’t in a man who’s gotten enough attention for multiple lifetimes, but on the women. The imprisoned trio is difficult to reach psychologically. As per the title, they still have faith in Manson’s words even years after his prophecies have failed to come to pass. At the same time, they’re easy to talk to, maintaining a healthy rapport with a portly prison guard and showing interest in Karlene Faith’s attempts to free their minds. The efforts are not altogether successful, but Harron finds the pursuit worthwhile. 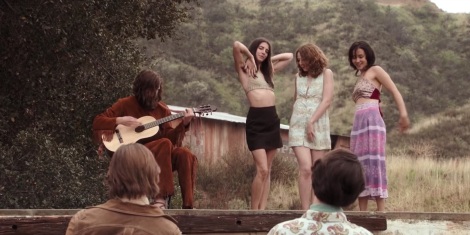 Though its heart is at least somewhat in the right place, The Haunting of Sharon Tate is a much scuzzier look at the murders, told from the opposite perspective. Superficially a tribute to Tate (played by Hilary Duff), the film centers on her alleged premonitions of the attack. In practice, these premonitions take on the form of graphic nightmare sequences, replaying the grisly events multiple times while leaving doubt as to whether they’re real or imagined. If the slasher movies of the 1970s and 80s were in some ways a response to senseless violence like the Tate murders, this movie simply literalizes the connection. Manson (Ben Mellish) becomes Michael Myers, popping up out of the dark, impossible to kill or escape. The film doesn’t go so far as to make him the perpetrator of the murders, correctly showing Atkins (Bella Popa), Krenwinkel (Fivel Stewart) and Tex Watson (Tyler Johnson) as the home invaders, but that kind of artistic license would be just as valid as what actually happens in the movie.

After a lot of faintly ludicrous dialogue about fate and subliminal messaging — all three of these movies feature Manson’s songs, but this is the only one to treat them as something taboo and occult — the movie reaches its climax. Just as the earlier brutality happened entirely in the main character’s head, the story takes another turn into the imaginary. Tate and her companions Jay Sebring (Jonathan Bennett), Abigail Folger (Lydia Hearst), Wojciech Frykowski (Pawel Szajda), and Steven Parent (Ryan Cargill) fight off their attackers and survive. This outcome is revealed to be the product of an alternate dimension, which Tate’s gift for foresight allows her to see before her death. Or something like that. This choice gives the movie a reason to avoid showing Tate being killed, which is undeniably decent. But the preponderance of blood and sensationalism in the surrounding sequences effectively cancels that out.

This leads us to another filmmaker with a penchant for experimenting with counterfactuals, Quentin Tarantino, director of the most prestigious and expensive of these movies, Once Upon a Time… in Hollywood. This film is only indirectly about Manson or Tate. It instead captures an entire era. Tarantino has compared it to Alfonso Cuarón’s Roma, another film that aestheticizes its director’s childhood, filtering it through his usual obsessions. As a matter of fact, sitting in the theater on the opening weekend, I found it easy to imagine many of the people around me not catching on that the Manson Family was part of the story, as the word “Manson” is never uttered. If, like me, you’ve listened to You Must Remember This and seen the other two movies before going to see Once Upon a Time, the signposts (some literal, like “Spahn’s Movie Ranch” and “Cielo Drive,” others subtle, like the sight of hippie girls in cutoffs digging through a dumpster) are blatant and full of foreboding. If you don’t recognize any of those things, the movie might feel like a long road to nowhere. I’m really curious what such a viewer would make of the scene at Spahn Ranch, in which fictional stuntman Cliff Booth (Brad Pitt) tries to find his old acquaintance George Spahn, meeting resistance from the hippie commune taking up residence there. Knowing that the real Spahn was alive and in some ways well at the time does nothing to dissipate the scene’s tension, nor does the fact that the nerve-racking music playing under it is coming from a television set in the room. Without actually doing anything, the Manson girls, through Tarantino’s eyes, manage to convey a great deal of menace. They’re scary again.

Then the movie reaches its controversial conclusion, specifically designed to defang that menace for all time. In Tarantino’s worldview, the violence unleashed in the Polanski/Tate residence on that night can only be purged through an equal amount of violence turned back on the attackers. I sympathize with both sides of the argument regarding this scene. On the one hand, feeling bad for what happens to Atkins (Mikey Madison), Krenwinkel (Madisen Beaty), and Watson (Austin Butler) feels like a concession to the Manson legend. They had no sympathy for their victims, why should we have any for them? At the same time, the nasty comic tone of the scene is a concern. There’s a different tenor when humiliating and gruesome violence is inflicted on young women than when, say, Hitler gets blasted with a machine gun until he doesn’t have a face anymore. Atkins jolting up with a knife like a slasher villain on three separate occasions places this movie more firmly in The Haunting of Sharon Tate territory than its champions would care to admit. Tarantino’s complicated but evident conservatism has also been noted. As the critic Walter Chaw wrote about the Manson Family in his beautiful review, “These guys were drugged-out idiots, sheep in thrall to an obvious madman and white supremacists whose bigotry was the least of their crimes against critical thought and breeding. Popular culture has raised them to the status of epic fiends. They weren’t that. They should’ve been relegated to the dustbin of deviant history and not elevated into these things that made me shiver at their mention in this film.” In other words, Tarantino does for Manson in this movie what John Lee Hancock was trying to do for Bonnie and Clyde in The Highwaymen, suggesting that what separates these two filmmakers is not so much ideology as talent. 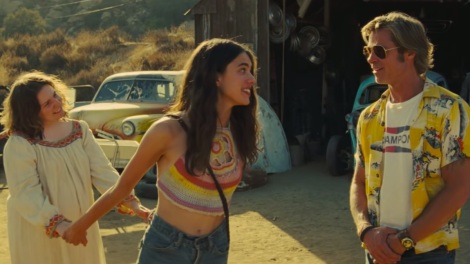 Why do we remember these horrifying events fifty years later? The randomness of the violence is certainly a factor, the realization that death can reach into a person’s home at any time for no real reason. The “Hollywood” of it all is also clearly pertinent, the realization that rich and famous people can’t save themselves any more than the rest of us. The sacrilege performed on a pregnant body makes it all the more shocking. Fundamentally, though, I didn’t need any of those things to know the name Charles Manson when I was a kid. He made himself famous for the sake of being famous, to feel the pleasure of controlling other people, to defy his own upbringing and mediocrity. In a way, it’s a shame that we, as a nation, let him get away with that. Then again, what’s the use of being famous? It’s all just so much dust. These days, every mass shooter becomes famous only until the next one comes along. By refusing to make Manson the main character in his story, all three of these movies accomplish something. As movies about Sharon Tate, they leave more mixed results. Ironically, although Charlie Says gives Tate (played by Grace Van Dien) the least screen time of the three, that’s the movie I’d point to as giving the most well-rounded portrayal. The Haunting of Sharon Tate is interested in her as a victim, Once Upon a Time… in Hollywood (where she’s played by Margot Robbie) as a symbol, but Charlie Says shows her humanity through a televised interview and a couple brief scenes. It’s a fitting tribute to a life that ended far too soon.